The TikTok star Addison Rae has stunned everyone at the MTV Movie Awards 2021 as she wore a sheer black bandeau top, in which she can be seen flaunting her chest. Her fans have loved her 'bold' avatar. 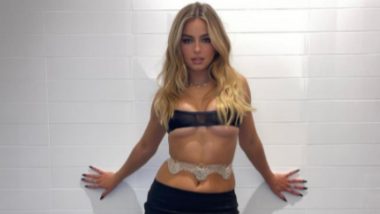 The MTV Movie & TV Awards have been held at the Hollywood Palladium in Los Angeles on Sunday night. Every year fans get to see their favourite stars dressed in various unique ensembles at the event. While this year was no different. Popular movie and TV stars have turned heads with their shocking yet-trendy looks.  TikTok star Addison Rae stepped into the red carpet of MTV Movie Awards 2021 in a sheer bandeau top and has stunned everyone.

The 20-year-old diva rocked the stage of MTV Movie Awards 2021 in a 'bold' look. She wore a sheer black Christopher Esber bandeau top paired with a matching floor-length long skirt. To complete her overall look, she opted for a bejewelled belt and kept her long beautiful tresses open. On the red carpet, Addison styled her look with impressive smokey eyes and a black suit jacket.

The TikTok star also took to her Instagram handle to share a few sizzling pictures of her from the event. In the pictures, she can be seen sensuously looking at the camera and flaunting her chest in a sheer bandeau top. While sharing the pictures, Addison just wrote, "MTV" followed by a black heart emoji. Soon after she posted the pictures, her fans started pouring in comments on the same. One of the users wrote, "Queen," while another one wrote, "Fantastic."

Last night, Addison Rae and her He’s All That co-star Tanner Buchanan also kissed each other at the stage of MTV Movie & TV Awards 2021. He’s All That will be premiered on Netflix later this year.

Addison Rae came into the limelight after her dancing videos on TikTok went viral. Since July 2019, she started actively posting videos on TikTok. She is one of the highest-earning TikTok personalities.  Addison released her first single "Obsessed" in March 2021.

(The above story first appeared on LatestLY on May 17, 2021 04:48 PM IST. For more news and updates on politics, world, sports, entertainment and lifestyle, log on to our website latestly.com).