Deepika Padukone dazzled as she walked the red carpet on the opening night of the Cannes Film Festival on Tuesday wearing fashion designer Sabyasachi Mukherjee's Bengal Tiger sari. The actress rounded off her retro look with bold and black eyeliner, black manicure, nude lips and a hair bun. 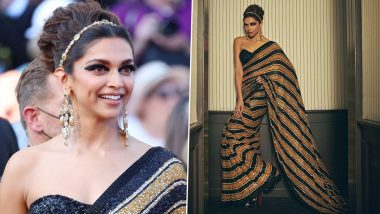 New Delhi, May 18: It was Kolkata-based acclaimed fashion designer Sabyasachi Mukherjee's Bengal Tiger sari that Deepika Padukone dazzled in as she walked the red carpet on the opening night of the Cannes Film Festival on Tuesday. The sari, which the actress and Cannes jury member paired with a black strapless blouse, stood out because of its golden and black stripes, inspired by the big cat after which the collection is named. Earlier during the day, she had appeared for the jury photocall also in a Sabyasachi ensemble of lime green pants and jaunty shirt. Cannes 2022: Urvashi Rautela Turns Snow White as She Makes Her Red Carpet Debut at the 75th Film Festival (View Pics).

As was to be expected, the ecstatic designer took to his Instagram handle to announce this fact to the world and say that the sari was a part of his Akash Tara collection, which celebrates heritage Indian crafts and techniques seen through a modern lens. "The blocks have been block printed and hand embroidered by some of India's finest craftspeople at the Sabyasachi atelier," the designer announced. India at Cannes 2022: From Deepika Padukone to R Madhavan, Celebs Who’ve Strutted the Red Carpet in Style (View Pics).

Deepika paired the sari with a bejewelled headband from Sabyasachi Jewellery's Royal Bengal collection. "The headband," the designer explained, "pays homage to the traditional Indian 'matha patti' headpiece with Art Noveau detailing, while the chandelier earrings updates a classic with an Art Noveau gaze."

Have A Look, Here:

The actress rounded off her retro look with bold and black eyeliner, black manicure, nude lips and a hair bun. The post begins with a telling quote from Sabyasachi: "The sari is a story I will never stop telling. No matter where we are in the world, it has its place."

(The above story first appeared on LatestLY on May 18, 2022 11:59 AM IST. For more news and updates on politics, world, sports, entertainment and lifestyle, log on to our website latestly.com).