Halloween 2020: From COVID-Themed Outfit to Nazi Look, 5 Offensive Costumes That Shouldn't be Worn For Halloween Party

Halloween is observed with grand celebrations in many countries on Oct 31 every year. Today people dress in scary costumes for parties. However, in the past many-a-times, people have worn clothes which are offensive to people and traditions. As Halloween 2020 approaches, we bring to you a list of costumes you should avoid for the occasion. 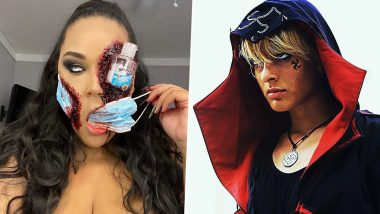 Halloween or All Hallows' Eve is observed with grand celebrations in many countries on October 31 every year. The tradition originated when the ancient Celtic festival of Samhain when people would light bonfires and wear costumes to ward off ghosts. In the eighth century, it became a day to honour all saints day. Today people dress in scary costumes and get together for parties. The themes of the parties are based on fright inducing situation with people wear dresses to look like ghosts or scary movie characters. However, in the past many-a-times, people have worn clothes which are offensive to people, cultures, communities and traditions. Hence, as Halloween 2020 approaches, we bring to you a list of costumes you should avoid for the occasion. Halloween Costume Ideas 2020: From Sexy Sanitiser to Astronaut in a Spacesuit, Ways You Can Dress up on October 31 and Also Follow the COVID-19 Safety Precautions.

Many-a-times people have been called out for cultural appropriation during Halloween. While it may look like fun to wear clothes that are very different from one's culture and traditions, it is important to understand that one's native customs is not for others to experiment as mere customers for Halloween. Here is a list of 7 costumes you should avoid this time and educate those who deem it appropriate. Halloween 2020 Costumes For Dogs and Cats: These Paw-dorable Pics and Purr-fect DIY Videos of Pets Will Give You Ideas to Dress Up Your Furry Companions For Spooky Festival.

The term "gypsy" is a derogatory term used to describe the Romani or Roma people, a nomadic ethnic group that lives primarily in Central and Eastern Europe. Media has shown them as fortune-tellers and swindlers and to wear a 'gypsy' costume is being stereotypical just them they are portrayed.

To wear the costume of a voodoo priestess it ignores the real religious significance of some of the symbol and portrays a racist image created by the media. There is a difference between actual "voodoo" religions and the voodoo that's shown in pop culture. Halloween Party 2020 Food Ideas: From Snacks, Cocktails to Desserts, Interesting Recipes to Add The Spooky Flavour on Your Menu (Watch Videos)

Adolf Hitler and the Nazis are responsible for the death of millions of Jews and are known for other atrocities they committed. Wearing a costume representing a Nazi could be seen as a representation of your stand on the historical killings.

COVID-19 pandemic has killed millions of people around the world and continues to do so. Wearing a costume showing a virus won't be considered lightly but how a deadly global health issue is reduced to a fun costume for a party.

The world is in the middle of a crisis situation currently and it is best to avoid any Halloween that will emotionally be offensive to people. Moreover, there is a need to be responsible individuals and pass down the same to the next generation even if that's about wearing a particular costume to a Halloween party.

(The above story first appeared on LatestLY on Oct 24, 2020 05:30 PM IST. For more news and updates on politics, world, sports, entertainment and lifestyle, log on to our website latestly.com).