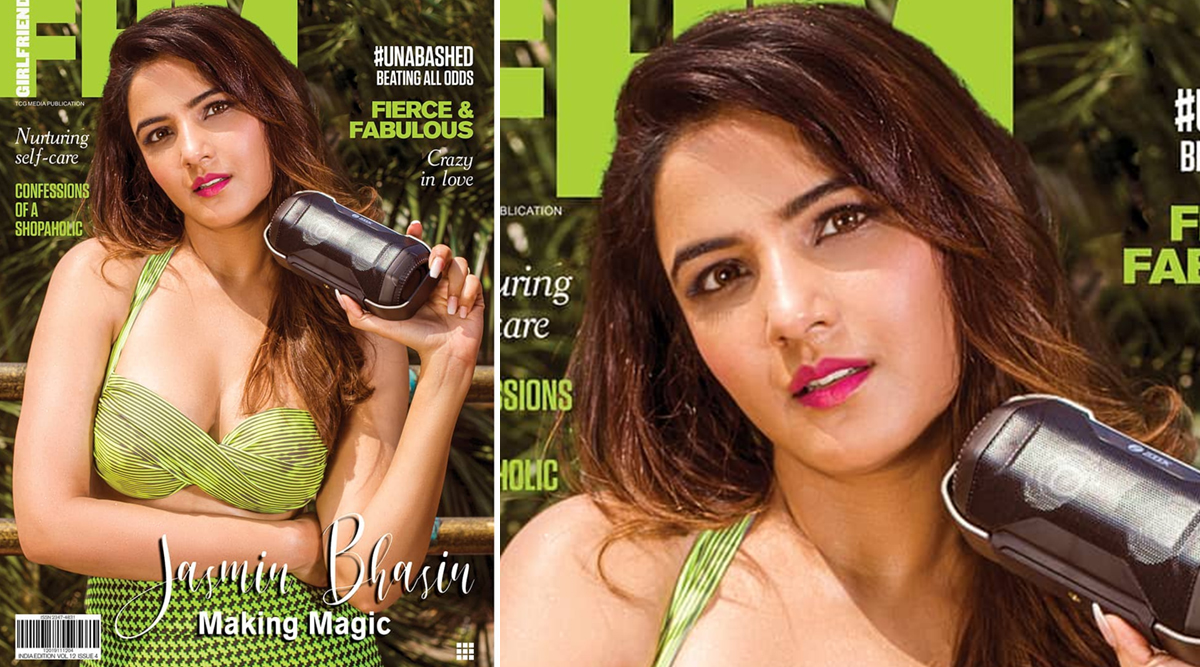 Actress Jasmin Bhasin achieved 'sexy' status a long time ago, and her Instagram posts are proof of the same. And while the actress is all set to dazzle on-screen as Ekta Kapoor's fourth Naagin in the shapeshifter franchise, she recently made it to the cover of FHM India Magazine's Girlfriend series and oh boy... does she look hot. Jasmin Bhasin started off her television career with Tashan-e-Ishq and since then, there has been no looking back for her. Her next project was the television adaptation of Chori Chori Chupke Chupke, titled Dil Se Dil Tak. Her next project was Star Plus' Dil Toh Happy Hai Ji, after which Jasmin also experimented with Khatron Ke Khiladi. The actress recently bagged Naagin 4 as the lead protagonist. Naagin 4: Jasmin Bhasin's Look In Ekta Kapoor's Supernatural Series Reminds Us Of Sridevi In Naino Mein Sapna From Himmatwala (View Pics)

Jasmin can be seen posing in a green bralette and printed pants on the cover of the magazine.

Here Are The Other Pictures From The Photoshoot, where Jasmin looks hot, sexy and chic.

After completing 8 years in the industry, Jasmin Bhasin @jasminbhasin2806 is busy learning and exploring the world of showbiz, and many of its intricacies. It’s been an incredible run so far, yet she maintains a sense of who she is and what she wants out of her burgeoning career. _ Dress: Not So Serious by Pallavi Mohan Shoes: Zara Ring: Fiona Diamonds @fiona.diamonds _ Hit fhmindia.com to read our conversation with her. _ #fhm #fhmindia #jasminbhasin #jasminbhasin_fans #jasminbhasininterview #jasminbhasinactor #actor #actorslife #actress #actresslife #tashaneishq #khatrakhatrakhatra #khatronkekhiladi #southindianfilms #soapopera #FHMgirlfriend #novemberdecemberissue

Why Fear When Shimmer Is Near:

You Too Feelin' The Intensity?

"For my television debut I took up Tashan-e-Ishq, and believed that it would provide me with a bigger platform on national television. To this day, I’m glad that I chose to make the switch, as the show was such a big hit amongst the audience, and since then I have never looked back," says @jasminbhasin2806 _ Embellished Dress: HERA by Aj Speaker: Thunder Plus by Zoook @zoook_india _ Hit fhmindia.com to read our conversation with her. _ #fhm #fhmindia #jasminbhasin #jasminbhasin_fans #jasminbhasininterview #jasminbhasinactor #actor #actorslife #actress #actresslife #tashaneishq #khatrakhatrakhatra #khatronkekhiladi #southindianfilms #soapopera #FHMgirlfriend #novemberdecemberissue

Black... Will Always Be In Style:

Jasmin will soon be seen in Naagin 4 and one of the ichhadaari Ekta Kapoor's supernatural series, alongside Nia Sharma and Vijayendra Kumeria. The series will premiere on Colors from December 14, 2019 in the 8 pm slot.