While Priyanka's new pictures are glamorous, we simply can't stop admiring those sultry expressions of hers that are impactful and engrossing at the same time. 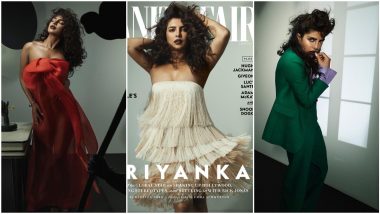 Priyanka Chopra Jonas is back again to doing what she does best (besides acting) - posing for the camera. PeeCee, as she's fondly called by her fans and friends is the cover star for Vanity Fair February issue and boy, those pictures are smokin' hot. Priyanka who's on her way to claiming the throne in Hollywood has decked up in style to pose for numerous pictures that will blow your mind and make you fall harder for her. Fashion Faceoff: Priyanka Chopra Jonas or Margot Robbie, Whose Sheer Black Outfit Did You Like More?

We love photoshoots that aren't restricted when it comes to styling. The muse is asked to pose in pantsuits as well as chic dresses that allow her to explore different designs while nailing them effortlessly. As seen in these new pictures, PCJ is rocking a smart, bottle green pantsuit by Maison Valentino as well as a sexy, sheer dress by Christian Dior and an off-shoulder tassel dress by Fendi. While her pictures are glamorous, we simply can't stop admiring those sultry expressions of hers that are impactful and engrossing at the same time. Fashion Faceoff: Priyanka Chopra Jonas or Madhuri Dixit, Whose Stunning Grey Saree Will You Steal?

Check Out Some More Pics

Priyanka has so much to look forward to in this new year. While her international thriller series, Citadel on Amazon Prime will release this year, she's also returning to Bollywood with Jee Le Zara, a road-trip movie directed by her co-star, Farhan Akhtar. PCJ definitely promises us an exciting year ahead and we hope she makes the most of it.

(The above story first appeared on LatestLY on Jan 13, 2022 10:20 PM IST. For more news and updates on politics, world, sports, entertainment and lifestyle, log on to our website latestly.com).