Zendaya posed as the cover girl of W Magazine's new issue and her pictures from the photoshoot are definitely setting the internet on fire. 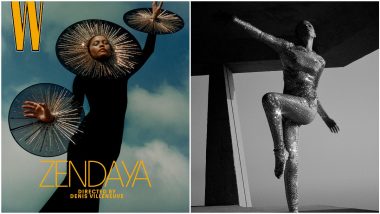 Euphoria sensation, Zendaya is the girl who's making the most headlines these days. After Spider-Man: No Way Home went on to shatter multiple box office records, she received some amazing reactions for the new season of Euphoria and of course, her adorable romance with co-star Tom Holland continues to make us blush. There's so much to write about her already and yet she continues to give us new topics for gush fest. The recent being her new photoshoot for W Magazine. Zendaya Birthday: Peppy, Chic and 'Euphoric', Her Fashion Choices Never Disappoint (View Pics).

Zendaya posed as the cover girl of W Magazine's new issue and her pictures from the photoshoot are definitely setting the internet on fire. Dressed in Schiaparelli and Valentino couture, the girl is oozing all the magical and mystical vibes. Now, these are words that are already synonymous with the actress and yet, we don't mind using them over and over again. If you are not a Zendaya fan or an admirer, we suggest you start worshipping this beauty. She's a sensation of recent times and it will take a while before we have her successor. Tom Holland and Zendaya Set New Goals With Their Stylish Appearance at the Uncharted Premiere in New York (View Pics).

While Zendaya will return with the next season of Euphoria and of course, she has another spidey film in her kitty, she'll also be seen in the next instalment of the Dune movie adaptation. The future belongs to her and we're gearing up to witness a storm that's brewing in her favour.

(The above story first appeared on LatestLY on Mar 04, 2022 09:00 AM IST. For more news and updates on politics, world, sports, entertainment and lifestyle, log on to our website latestly.com).