Datta Jayanti, also known as Dattatreya Jayanti, is a Hindu festival that celebrates the birth anniversary of Dattaguru, which is a combined form of the Hindu male divine trinity of Brahma, Vishnu and Shiva. This year the holy festival will be marked on Wednesday, 7 December. Continue reading... 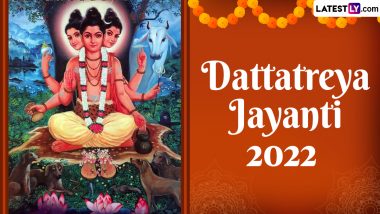 The Trinity of three Hindu Gods — Brahma, the creator, Vishnu, the Preserver and Shiva, the destroyer —  is worshipped as Lord Dattatreya. The Hindu Male Divine trinity was a paradigmatic Sannyasi and one of the lords of yoga whose birth anniversary is celebrated annually on the Full Moon Day of the holy month Margashirsha as per the Hindu Calendar. It is believed that the omnipresent Dattaguru was a Brahmachari, Avadhoot and Digambara. The festival is mainly observed in the Indian state of Maharashtra as Dattatreya Jayanti or Datta Jayanti. Dattatreya Jayanti 2022 in the Gregorian Calendar will be observed on Wednesday, 7 December. To know more about the pious observance, keep scrolling down. We have mentioned everything from Datta Jayanti 2022 Purnima Tithi to the importance of the religious event. Datta Jayanti Messages, HD Images and Wishes Take Over Twitter, Netizens Pay Tribute to Lord Dattatreya on His Birth Anniversary.

According to Drik Panchang, Dattatreya Jayanti 2022 Purnima Tithi will commence at 8:01 am on Wednesday, 7 December and end at 9:37 am on the following day, i.e. Thursday, 8 December.

Lord Datta is revered as the Guru of the Gurus who initiated the root concept of fraternity and social equality. His ardent worshippers also call him Shri Gurudevdutt, Gurudevji, Gururaj and Guruswami. There are numerous shrines devoted to Lord Dattaguru in South India. On the sacred festival of Datta Jayanti, it is auspicious to visit these temples to pay reverence to the Hindu Trinity. Folks also take early morning baths in holy rivers or streams on the festival day. Some also observe fast in the faith that the Lord will offer the believer a thriving and ideal life. The idols of Lord Dattatreya are worshipped at homes and temples with flowers, incense, lamps, and camphor to attain the path of righteousness.

The iconography of Lord Datta is different in all the Indian regions. In Maharashtra, Duttaguru is typically worshipped with three heads and six hands, one hand each for Brahma, Vishnu and Shiva. The Lord is dressed in simple monk-like attire and resides in a forest or wilderness, in a meditative yogic lifestyle. Dattā, in His portraits, is also surrounded by four dogs and a cow, which signify the four Vedas and mother Earth which nourishes all living beings. In regions of the Himalayas, Varanasi and southern Maharashtra, God Dattatreya is depicted with one head and two hands, accompanied by four dogs and a cow.

(The above story first appeared on LatestLY on Dec 06, 2022 10:49 AM IST. For more news and updates on politics, world, sports, entertainment and lifestyle, log on to our website latestly.com).