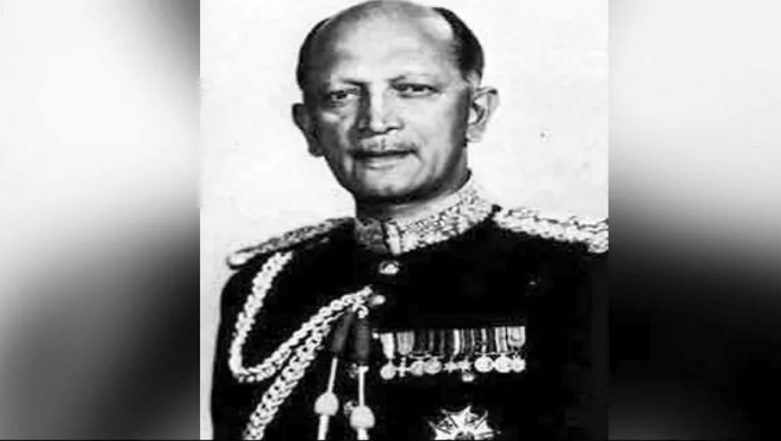 Field Marshal Kodandera Madappa Cariappa breathe his last 26 years ago on May 15, 1993. He was the first Indian Commander in Chief of the Indian Army. Cariappa took command of the Army from its British Commander in Chief, General Sir Roy Bucher. He was also nicknamed "Kipper". Cariappa was born on January 28, 1899, in Madikeri, Kodagu which is today part of Karnataka.

Field Marshal Criappa had his formal education in Madikeri and pursued his college education from the prestigious Presidency College in Chennai. Cariappa joined the British Indian Army in 1919 and was commissioned in the 88th Carnatic Infantry at Bombay (now Mumbai) as Temporary Second Lieutenant. He was granted permanent commission on September 9, 1922. In 1927, he was promoted to the rank of Captain. Sam Manekshaw 105th Birth Anniversary: Remembering Indian Army's 1st Field Marshal With His Memorable Quotes!

During the World War–II, Field Marshal Criappa actively served in Iraq, Iran and Syria in 1941–1942 and then in Burma in 1943–1944. Back in India in March 1942, he was posted as second-in-command of the newly raised 7th Rajput Machine Gun Battalion at Fatehgarh. Cariappa was posted as AQMG of the 26th Indian Division stationed at Buthidaung in Burma. The division played an important role in pushing the Japanese back from Arakan. For his services in the operation, Cariappa was awarded the Order of the British Empire (OBE) in June 1945.

In the same year, Cariappa was made the commander of the Bannu Frontier Brigade in Waziristan. During this period, Colonel Ayub Khan – later Field Marshal and President of Pakistan from 1962–1969 – served under him. In 1947, Cariappa was the first of two Indians selected to undergo training at the Imperial Defence College, at Camberly, in the UK, to attend the higher command courses. Army Day 2019: Influential Quotes to Share & Honour the National Heroes on January 15.

After Independence, He was promoted to the rank of Major General and was appointed as deputy chief of the general staff. In November 1947, Cariappa was appointed as the Eastern Army commander after being promoted to a rank of Lieutenant General. As the situation worsened in Kashmir in 1947, Cariappa was moved as General Officer Commanding-in-Chief, Western Command. He directed operations for the recapture of territories seized by Afghan tribals backed by the Pakistani Army.

On January 15, 1949, Cariappa, took over the reins of the Indian Army. The day is now celebrated in India as the Army Day. He served in the Indian Army for over 30 years. After his retirement in 1953, he served as the Indian high commissioner to Australia and New Zealand until 1956. On April 28, 1986, the Government of India conferred the rank of field marshal on Cariappa. He was the second Field Marshal of the Indian Army after Sam Manekshaw. Cariappa's health began to deteriorate in 1991. He suffered from arthritis and heart problems. He died in his sleep on May 15, 1993, at the Bangalore Command Hospital.

Cariappa was married in March 1937, in Secunderabad, to Muthu Machia. The couple had a son and a daughter. Their son, K.C. Cariappa also known as "Nanda", joined the Indian Air Force and rose to the rank of air marshal. During the 1965 war, Nanda was shot down over Pakistan. He was captured and held as a prisoner of war (POW). After realising the identity of the captured IAF officer, General Ayub Khan, the then president of Pakistan himself contacted Cariappa to inform about his son. When Ayyub offered to release Nanda, Carriapa asked him to give his son no better treatment than any other POW. Field Marshal Carriappa was a recipient of Indian Independence medal, Burma Star and General Service Medal.