Maharashtra Krishi Din 2021: Date, History & Significance of The Day To Commemorate The Birth Anniversary of Vasantrao Naik, the Father of Green Revolution

Maharashtra Krishi Din - also known as Maharashtra Agriculture Day - is celebrated on July 1 every year to commemorate the birth anniversary of the “Father of Green Revolution” - Vasantarao Naik. This day also pays homage to framers across the state of Maharashtra. 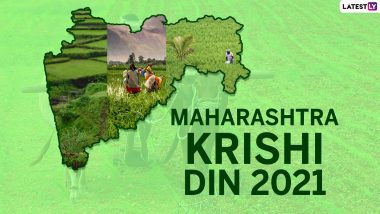 “Farming looks mighty easy when your plough is a pencil, and you’re a thousand miles from the cornfield.” — President Dwight D. Eisenhower. No one can really comprehend the harrowing work involved in farming until you're ploughing the soil yourself. Farmers are the backbone of a nation as they provide us with essential crops that keep us sustained in our daily lives. Let's face it, we'd all starve to death if it weren't for these men and women who work in the field and see that the nation is properly fed. Maharashtra Krishi Din - also known as Maharashtra Agriculture Day - is celebrated on July 1 every year to commemorate the birth anniversary of the “Father of Green Revolution” - Vasantrao Naik. This day also pays homage to framers across the state of Maharashtra.

Maharashtra is widely regarded as an agrarian state responsible for the production of most grains in the country.  Lately, we've seen the plight of these farmers who've taken to the streets to protest the various new agrarian laws put forth by the government. These farmers have had a hard life owing to the deplorable rainfall accelerated by climate change that has led to a severe loss of crops and as an extension had an adverse effect on their livelihood. In celebration of this day, we should remember the dire straits of these farmers and encourage our lawmakers to frame laws that will help sustain their livelihood as opposed to further amplifying their troubles.

Maharashtra Krishi Din was designated to commemorate the birth anniversary of  Vasantrao Naik, who served as the chief ministers of Maharashtra from 1963 to 1975. Naik contributions and policies in the agrarian sector led him to be known as the “Father of Green Revolution.” He was also the longest-serving Chief-Minister in Maharashtra. This day acknowledges the services of  Vasantrao Naiks on the behest of the Indian farmers. On this day, the whole state holds several activities to honour farmers. This day also brings the plight faced by the farmers to the forefront so it can be addressed by the government.  India Post also issues stamps created on the theme of farms, farmers and farm animals.

(The above story first appeared on LatestLY on Jun 29, 2021 02:50 PM IST. For more news and updates on politics, world, sports, entertainment and lifestyle, log on to our website latestly.com).