Navratri 2020 Chandraghanta Puja: Know The Colour and Goddess of Day 3 to Worship The Third Avatar of Maa Durga This Sharad Navaratri

Navratri on the third day is celebrated with equal enthusiasm with devotees following the traditions and rituals to worship Devi Chandraghanta. Also known as Chandrakhanda, Chandika or Ranachandi, Maa Chandraghanta is known to impart her disciples with bravery, courage and peace. 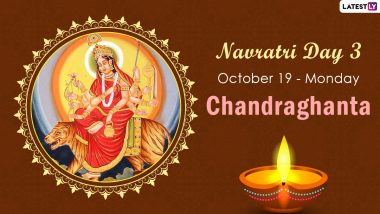 It's Day 3 of Sharad Navratri 2020. Celebrated for nine days starting from October 17 to October 25 this year, each day is devoted to a form of Goddess Durga. The third day ie October 19 honours Devi Chandraghanta. Devotees worship this third avatar of Maa Durga. As the festival also has a colour chart, devotees will wear the colour that is decided for the third day of Sharad Navaratri dedicated to Devi Chandraghanta. The colour of the Navratri 2020 Day 3 is White. Each day of Navratri is celebrated with equal enthusiasm with devotees following the traditional rituals. This form of Goddess is also known as Chandrakhanda, Chandika or Ranachandi and is known to impart her disciples with bravery, courage and peace. Navratri 2020 Dates & List of Colours PDF Free Download Online: Full Schedule of Navratri And 9 Colours to Wear on Each Day of the Festival Celebrating Goddess Durga.

In Hinduism, Chandraghanta means “one who has a half-moon shaped like a bell.” Her third eye is always opened, and she is ready for war against the demons. Worshipping her devotedly, their sins, distresses, physical sufferings, mental tribulations and ghostly hurdles are eradicated. Happy Navratri 2020 HD Images And Durga Puja Wallpapers For Free Download: WhatsApp Stickers, Facebook Greetings, GIF Images, Instagram Stories And Messages to Send on The Auspicious Festival.

After Lord Shiva finally agreed to marry Parvati, the Lord brings a procession of gods, mortals, ghosts, ghouls, goblins, sages, ascetics, aghoris and shivaganas to the gates of King Himavan’s palace. Parvati’s mother faints, looking at Shiva’s fearsome form. In order to save her parents and other family members, Parvati transforms herself into Goddess Chandraghanta.

People worship Maa Chandraghanta to keep all evil energies away. Devotees offer milk or kheer to the goddess as part of bhog. They offer special prayers and chant Maa Chandraghanta mantras throughout the night.

In the Hindu scriptures, Chandraghanta is described to have eight hands holding trishula, gada, bow-arrow, khadak, kamala, ghanta and kamandal. She rides on a tiger or lion as her vehicle, which represents bravery, courage. The goddess wears a half-moon on her forehead and has a third eye in the middle of her forehead. Wishing you all Happy and Blessed Navratri celebrations.

(The above story first appeared on LatestLY on Oct 19, 2020 08:30 AM IST. For more news and updates on politics, world, sports, entertainment and lifestyle, log on to our website latestly.com).