After September that did not have a lot of festivals, comes October with many. From Dassehra, Diwali to many international observances, the 10th month is filled with festivities. One of the national festivals of the country is observed on October 2nd as Gandhi Jayanti. Check out the listed below for dates of important festivities and observance 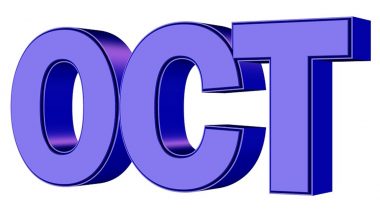 After September that did not have a lot of festivals, October comes with many. From Dassehra, Durga Puja to many international observances, the tenth month of the year is filled with festivities. One of the national festivals of the country is observed on October 2nd as Gandhi Jayanti, which marks the birth anniversary of Father of the Nation, Mahatma Gandhi. World Teacher's Day, International Day of the Girl Child and Indian Force Day also falls in the month of October. The month is filled with festivals, events, observances and a lot more. Listed below are dates of festivities, observances, occasions and some important birthdays. The important Hindu festivals of Dassehra and Navratri also falls in this month. International Coffee Day 2020 Quotes & HD Images: Quirky Thoughts And Instagram Captions to Share With Photos of a Hot Cup of Coffee!

Every year, Diwali falls in either October or November, depending on the cycle of the moon. The festival of lights will be celebrated on November 14.  Navaratri a religious celebration for nine nights also falls in October this year. It has various significance in different parts of the country. The last five days of Navratri is observed as Durga Puja. People pray to different Gods and observe the festival by following varying practices depending on the regional customs. Navratri 2020 will begin on October 17 and end on October 25. Dussehra, also known as Vijayadashami is celebrated at the end of Navratri. It falls on the tenth day of the Hindu month of Kartik. Happy Children’s Day 2020 Wishes, Images and Messages Flood Twitter: Netizens Share Meaningful Wishes to Celebrate Children’s Day in Sri Lanka on October 1.

During Navratri, people pray to different Gods and observe the festival by following varying practices depending on the regional customs. Navratri 2020 will begin on October 17 and end on October 25. Durga Puja is observed from October 22 to 26. It is of great significance in West Bengal and some northeastern states. Large scale festivities are arranged for the occasion. Mysore Dussehra will be observed on October 17 to to 27.

Meanwhile, Oktoberfest, an annual celebratory festival that begins in September and ends in October, has been cancelled due to COVID-19 pandemic.

October has a lot of religious festivals, some of the most Hindu observances. The month also boasts of international events including World Habitat Day, World Teachers Day, Global Handwashing Day, World Food Day and a lot more. United Nations Day, International Snow Leopard Day and Indira Gandhi death anniversary is also observed this month. It also marks the birthdays of some prominent people in India and across the globe.

(The above story first appeared on LatestLY on Oct 01, 2020 10:01 AM IST. For more news and updates on politics, world, sports, entertainment and lifestyle, log on to our website latestly.com).