Rosa Parks Day 2022: Know Date, History and Significance of the Day That Celebrates Achievements of the Brave Civil Rights Activist

Rosa Parks was born on February 4, 1913, and breathed her last on October 24, 2005. She was a seamstress by profession and was also the secretary for the Montgomery chapter of the NAACP. Parks was 42 years old when she made history and invigorated the fight against racial injustice. 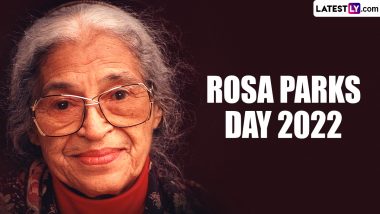 Every year, Rosa Parks Day is celebrated in the US on December 1. This day is celebrated to honour Rosa Parks, the brave civil rights activist for her contributions that have been most impactful to the movement. Rosa Parks was born on February 4, 1913, and breathed her last on October 24, 2005. She was a seamstress by profession and was also the secretary for the Montgomery chapter of the NAACP. Parks was 42 years old when she made history and invigorated the fight against racial injustice. 9 Interesting Facts About Notable American Activist, a Key Figure in Montgomery Bus Boycott.

Parks’ persona is an inspiration to all. According to historical records, Parks' action gained notoriety leading to the Montgomery bus boycott, which was a seminal event in the civil rights movement and was a political and social protest campaign against the policy of racial segregation on the public transit system of Montgomery, Alabama. The campaign lasted from December 1, 1955, to December 20, 1956. As Rosa Parks Day is just around the corner, here’s all you need to know about the history and significance.

Rosa Parks Day was created by the California State Legislature. It was first celebrated in the year 2000. The holiday was first observed on January 5, 2000, and every year thereafter, created by an act of the California legislature. The special day celebrates the achievements of the fierce African-American activist known as “The Mother of the Civil Rights Movement.”

The holiday was first designated in the US state of Ohio by Joyce Beatty, an advocate who helped Ohio's legislation pass to honour the late leader. In 2014, Missouri Governor Jay Nixon proclaimed Rosa Parks Day official in the state while Oregon governor John Kitzhaber declared that Oregon would celebrate its first Rosa Parks Day in the same year. In 2021, the Texas Legislature passed HB 3481, recognizing December 1 as Rosa Parks Day in the state. After Juneteenth became a federal holiday, there are growing calls for this day to also be observed at the federal level. On September 3, 2021, HR 5111 proposes that this day be added to the list of federal holidays. Juneteenth 2022: Know Date, History, Significance – Everything To Know About the Day That Celebrates the End of Slavery in the United States.

Rosa Parks Day promotes civil rights, and equal rights and opportunities for all communities across the country. Rosa Parks Day is a holiday in honour of the civil rights leader Rosa Parks, celebrated in the US states of California and Missouri on her birthday, February 4, and in Ohio and Oregon on the day she was arrested, December 1. The event is marked by events and activities arranged by organisations, government leaders, and church figures.

(The above story first appeared on LatestLY on Dec 01, 2022 08:00 AM IST. For more news and updates on politics, world, sports, entertainment and lifestyle, log on to our website latestly.com).