There’s a lot to find out about the notable American activist, Rosa Parks, who played a crucial role in the popular ‘Montgomery bus boycott’, a movement for equal rights. If you are searching for interesting things about Rosa Parks, then you have arrived at the right place. 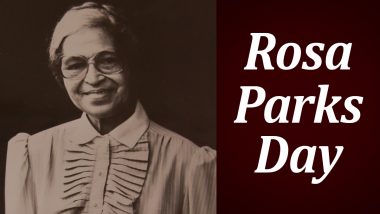 It will be the 20th anniversary of the Rosa Parks Day celebrations in Ohio and Oregon and San Antonio, City in Texas, major cities in the United States on December 1. Other US states like California and Missouri observe this day on February 4. The US national day is observed to honour the life and achievements of a civil rights activist Rosa Parks. The first observance of the official Rosa Parks Day took place in 2000 when the California State Legislature sanctioned it. The event holds a remarkable significance in the history of the USA. There’s a lot to find out about the notable American activist, Rosa Parks, who played a crucial role in the popular ‘Montgomery bus boycott’, a movement for equal rights. If you are searching for interesting things about Rosa Parks, then you have arrived at the right place. Lesser-Known Facts About Former San Francisco 49ers Quarterback and American Activist.

1. Rosa Louise McCauley Parks was born on February 4, 1913, in Alabama, in the US. Rosa came from a humble background – her mother (Leona Edwards) was a teacher, and his father (James McCauley) was a carpenter. Not many people know that Rosa had a liking for sewing from a young age.

2. After the Montgomery episode in 1955, Rosa Parks soon became an international icon due to her fight against racial injustice. She continued her work in the next decades, especially helping the people of the black community, by fighting the cases of people who were political prisoners.

3. In the year 1992, Rosa Parks wrote her autobiography ‘My Story’, in which she tells about the ‘Montgomery Bus Boycott’, and what made her take that decision. It was written to inspire the younger generation, and educate them about racial injustice prevalent in the US.

4. Recalling about the history-changing episode on December 1, Rosa said, “People always say that I didn't give up my seat because I was tired, but that isn't true. I was not tired physically, or no more tired than I usually was at the end of a working day. I was not old, although some people have an image of me as being old then. I was forty-two. No, the only tired I was, was tired of giving in.”

5. In 2005, Rosa Parks died to natural causes aged 92. She and her husband didn’t have any children. However, she was survived by her sister-in-law, and several cousins, nieces, and nephews. Montgomery and Detroit city officials tied black ribbons on the front seats of the buses, until her funeral, to honour the life and achievements of Rosa.

7. Rosa Parks received the Martin Luther King Jr Award in 1980, Presidential Medal of Freedom in 1996, Congressional Gold Medal in 1999. She was also featured in the Times magazine in 2000, as one of the 20 most influential and iconic figures of the 20th century.

8. In 2019, Mattel introduced a Barbie doll, in a similarity of Rosa Parks, was released in the market in their range of ‘Inspiring Women’. In 2020, popular rapper Nicki Minaj mentioned Rosa Parks in one of her famous songs ‘Yiked’.

9. Rosa Parks is fondly remembered as the ‘the first lady of civil rights’, and ‘mother of the freedom movement’ in the US.

Rosa Parks left a rich legacy behind. Her life was dedicated to fighting for the causes of the people of the black community who faced racial injustice in their daily life. Rosa became a beacon of light for millions of people, at the time when racial segregation was at the peak. As we near the iconic date, December 1, we at LatestLY thank her enough and wish her soul rests in peace.

Disclaimer: The above piece of information is collated from different sources on the internet. It doesn’t mean to demean or insult anybody. The author of the article and LY does not vouch for the authenticity of the article. We hope you enjoyed reading about Rosa Parks as much as we did collate it for you!

(The above story first appeared on LatestLY on Dec 01, 2020 08:09 AM IST. For more news and updates on politics, world, sports, entertainment and lifestyle, log on to our website latestly.com).