Telugu Language Day 2020: Know About Date, History And Significance of The Day Observed to Highlight The Importance of The South Indian Language 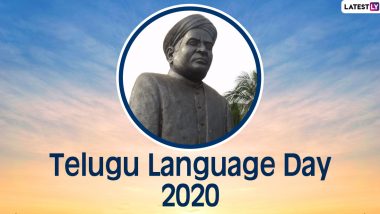 The Telugu Language Day 2020 will be observed on August 29. The day is celebrated in India’s southern state of Andhra Pradesh. August 29 is chosen as the Telugu Language Day so that it could coincide with the birthday of the Telugu poet Gidugu Venkata Ramamurthy. He was a Telugu writer and one of the earliest modern Telugu linguists and social visionaries during the British rule. Andhra Pradesh Formation Day 2019: Celebrations to Kick-Start Soon at Indira Gandhi Municipal Stadium in Vijayawada.

Ramamurthy was born on August 29, 1863. He was born at Parvatalapeta, Srikakulam. His father died when he was only 12 years old. He studied privately and passed his matriculation. Ramamurthy had studied many languages and comprehended the philosophy of language. Telugu became a standardised language with the efforts of Ramamurthy.

Today, modern Telugu is used in schools and educational institutions as the medium of instruction, examination and also writing. The Andhra Pradesh government presents awards on this day to Telugu scholars. The state government also provides funds with the objective of the betterment of the Telugu language. The Department of Culture is responsible for organising events on behalf of the Andhra Pradesh government. Haryana Formation Day 2019: Know History and Significance of The Day When Haryana Was Carved Out of Punjab.

Telugu is a Dravidian a Dravidian language spoken by Telugu people predominantly living in the Indian states of Andhra Pradesh, Telangana and Yanam district of Puducherry. Telugu ranks fourth among the languages with the highest number of native speakers in India. It is one of the 22 languages with official status in India. Telugu is the third most spoken Indian language in India after Hindi and Bengali.

(The above story first appeared on LatestLY on Aug 28, 2020 06:43 PM IST. For more news and updates on politics, world, sports, entertainment and lifestyle, log on to our website latestly.com).