World Snake Day 2020: Did You Know Some Snakes Can Fly? Here Are Interesting Facts About The Carnivorous Reptiles 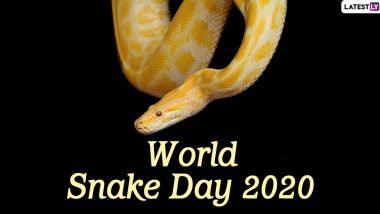 For Wildlife enthusiasts around the world, the 16th of July is a special occasion as they celebrate the World Snake Day – an occasion dedicated to one of the most beautiful, dangerous and enigmatic living creatures on the planet. The human civilisation has been fascinated by snakes for time immemorial and they have been part of folktales and mythologies too. While there is no story behind the origin of the World Snake Day, NGOs and snake aficionados around the world use it to propagate the message of conservation of snake habitat as the reptiles face more and more dangers with each passing day. While the snakes try and avoid human contact as much as possible and with only one-fourth of them being venomous, there is a large section of society which is misinformed about them and hence the day plays a crucial role in knowledge sharing. On World Snake Day 2020, These Silly Snake Puns and Riddles Will Make You Laugh 'Hisssterically'.

On World Snake Day, we take a look at some interesting facts about them.

Snakes have an aura about them that will continue to draw the attention of academician who studies about them. There are still many things that we don’t know about these majestic beings which are needed for a better human snake co-existence.

(The above story first appeared on LatestLY on Jul 16, 2020 11:14 AM IST. For more news and updates on politics, world, sports, entertainment and lifestyle, log on to our website latestly.com).