Chai(s) of India: From Butter Tea in Ladakh, Bombay Cutting Chai to Kashmiri Kahwa, How India's Love for This Beverage Differs From Region to Region 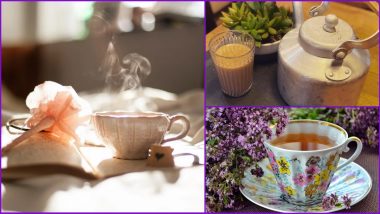 India is a chai-loving nation! Yes, we say chai and not tea, because the former expresses an emotion for the beverage of 'tea'. Essentially, they both mean the same thing, but when you ask for a chai versus a tea, you may get served differently, depending where you are. Just like India boasts of its multiculturalism and variety of cuisines, the beverage of tea also differs from one region to another. For any tea lover, their day cannot start without sipping down on this concoction. And everyone will have a preference of how they like their tea. Cutting Chai, Butter Tea, Kahwa or Tandoori Chai, the preparations differ and so does the taste. Let us look at some of the varieties of tea available and made in India. An unusual twist given to Indian teas has even fueled debates online.

A tea with dollops of butter in it! Recently, a video from Agra of making butter tea is going viral and people are highly unimpressed. You may irk at it, but it is extremely healthy way of ensuring nutrition in the wintery regions. Butter tea is more commonly consumed in Ladakh and Tibetan regions. It helps in keeping the lips soft which otherwise get chapped in the colder regions.

Kahwa is a speciality from Kashmir, a flavoured green tea that even includes dry nuts like almonds. It has a rich flavour with whole spices and saffron. The tea specially prepared in Kashmir is to tackle the cold weather conditions here. Cardamom, almonds, cinnamon and cloves are added and Kashmiri Kahwa is usually had after breakfast or lunch.

If you ever visit Bombay, or are a resident yourself, you know how cutting chai is a conversation starter and makes some of the best bonds. It is same as Masala tea, flavored with common spices but served just half in glasses, called as 'Cutting'. A half chai is said to be enough to refresh one and the best ones are available on roadside tea stalls in the city.

A smoky flavoured tea preparation that is served in special kulhad or earthen pots. Today, Tandoori Chai is popular in many states, but many believe it first started in Pune, Maharashtra. Tandoori Chai is made with similar aromatic spices but the way it is boiled in clay oven, much like Tandoori roast is what makes it unique in its taste.

Noon chai, also called as shir chai, gulabi chai, or pink tea, is a traditional tea beverage, that comes from the Kashmir Valley. Once again, differing from your regular tea preparations, Noon chai is made with baking soda and gunpowder tea. The baking soda gives it a pink colour and it does not include sugar but sweeteners may be added when served on stalls here.

Sulaimani Chai is popular in the Southern states of India, especially Kerala. This tea has no milk but served with a dose of mint and lemon. It is infused with flavours of the fresh herb and one sip of it will you feel rejuvenated. It originates from the Arabic beverage called ghava. The traders who visited the Indian coast got the recipe here with different changes, and Sulaimani Chai, a flavorful concoction was born. Masala Chai Ice Cream With Sugar-Laced Paratha, Anyone? Twitterati Divided Over Weird Food Combination! (See Pics).

Besides these preparations, there are varieties of tea like Assam Tea, Darjeeling Tea, Niligiri Tea which are made with tea produced in the region. Here the taste differs, but the method of making tea is the same. Which is your favourite variety of drinking tea?

(The above story first appeared on LatestLY on Jan 18, 2021 02:47 PM IST. For more news and updates on politics, world, sports, entertainment and lifestyle, log on to our website latestly.com).