China has claimed of receiving a ISO certification from the International Organisation for Standardization (ISO) for "kimichi industry." The mention of Kimichi instead of pao cai- a pickled vegetable, has not gone well with South Koreans. Because Kimichi, fermented cabbage dish originates from Korea. A sort of 'culture' war has started online among people of the community. 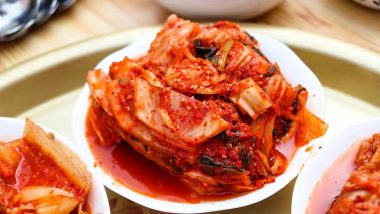 A culture of a place is based on a lot of things like its traditions, rituals, beliefs, language and of course, the food. Cuisine of a place is a very important part of culture and it can hurt sentiments if wrongly claimed. Something similar is happening on social media, between South Korea and China over 'Kimchi,' a traditional cabbage dish part of Korean diet. It so happened, China has claimed of receiving a ISO certification from the International Organisation for Standardization (ISO) for "kimchi industry." The mention of Kimchi instead of pao cai- a pickled vegetable, has not gone well with the South Koreans. Because Kimchi, fermented cabbage dish originates from Korea. It is a widely popular part of their diet. Thus a sort of 'culture' war has started online among people of the community. ‘Odisha Rasagola’ Gets GI Tag, Two Years After West Bengal Won Rasgulla Tag.

As per a report in The Guardian, the Chinese Global Times newspaper reported on China receiving certification from ISO. The ISO Status was an "international standard for the kimchi industry led by China". In the year 2000, South Korea had approached the United Nations Food and Agriculture Organisation to formulate international Kimchi standards and protect the sovereignty of their dish. Meanwhile, the ISO covered only pao cai- pickled vegetable often found in Sichuan cuisine. K-Pop Diet: Will This Whole Food-Based Korean Diet Lead to Weight Loss?

But social media users were not impressed and saw it as an attack on their culture. South Korean social media users lashed out at Chinese for 'stealing', while the Chinese netizens countered them with their own failure at meeting the standards of the dish. We have see similar conflicts where Twitter users in India once argued over which is a better dish- Litti Chokha vs Dal Baati. But in this case, the issue is more culture specific given it concerns the national sovereignty of the nation.

Following this barrage of criticisms online, both country ministries have issued statements. As per South Korea’s agriculture ministry the latest ISO approval "had nothing to do with kimchi." They added, "It is inappropriate to report (pao cai winning the ISO) without differentiating between kimchi from pao cai from Sichuan." And defending their certification, the Chinese ministry clarified that China's dish standards were acknowledged for 'Pao Cai', which is a separate version of the same dish. They said it is not the same as Kimchi.

(The above story first appeared on LatestLY on Dec 01, 2020 02:02 PM IST. For more news and updates on politics, world, sports, entertainment and lifestyle, log on to our website latestly.com).