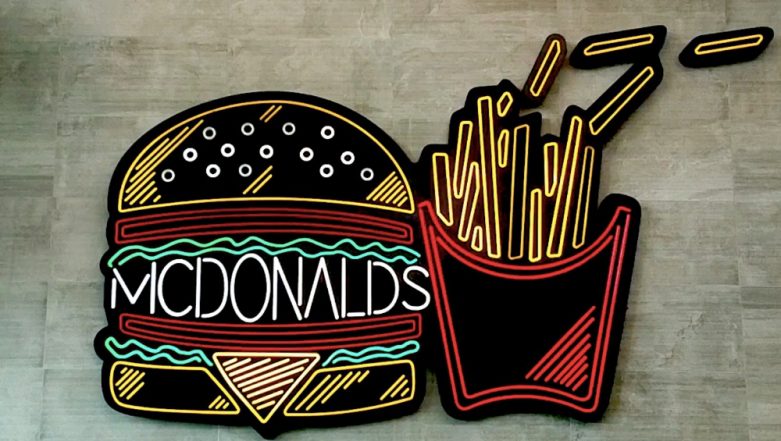 McDonald's lovers in India are in for bad news. The US-based fast-food chain is dropping some of the popular items off their menu. The restaurant chain has taken these items off the menu from 13 stores which reopened in Delhi-NCR. This comes after the McDonald's agreement with partner Vikram Bakshi to acquire Connaught Plaza Restaurants Pvt Ltd (CPRL). The fast-food chain had closed 160 chains on May 9, in North and East India. McDonald's Introduces McAloo Tikki as a Vegan Burger in the US.

The US company has also taken off Coca-Cola's fruit-based drink brand Maaza off the list. Barry Sum, director of corporate relations for Asia at McDonald’s told PTI, "To ensure a more consistent McDonald’s India experience across the different regions, we have permanently removed some of the least popular items including the McAloo Wrap, Chicken McGrill, Egg Wrap, Grilled Chicken Wrap, and Maaza beverage. The rest of the menu remains the same." Barry also said that the menu boards, tray mats, and packaging have been changed to comply with McDonald's brand identity which is simple. McDonald’s Self-Order Touchscreens Tested by UK Scientists Find Poo & Potentially Deadly Bacteria That Cause Serious Illness.

McDonald's India in a statement said, "The company plans to re-open the rest stores over the coming days and weeks." Rob Hunghanfoo, head, CPRL, which oversees operations of McDonald’s outlets in the North and East regions of India said, "We are thrilled to have started the re-opening process and look forward to serving our customers a more authentic McDonald's experience at these first 13 locations now open for business in Delhi." McDonald's Ad Celebrates The Essence of Ramadan Beautifully (Watch Video)

The company said that the customers visiting these 13 stores will be treated to a new service experience with more customised hospitality, refreshed menu boards, merchandising and packaging. CPRL had temporarily shut down its 160 stores after an agreement with its estranged partner Vikram Bakshi to transfer his share in the JV to the US-based firm. Along with Delhi, regions in North and East India had also been affected by the temporary closure of McDonald's India.