National Frozen Food Day 2021: From Freezer Burn Being Normal to No Requirement For Added Preservative, Here Are 11 Cool Facts About Frozen Foods

National Frozen Food Day is annually celebrated on March 6 in the United States of America. This event is observed to recognise the preservation feat that freezing fruits, vegetables, and meats have been on modern life. This day is also celebrated to understand how frozen food evolves and their importance in our day to day life. 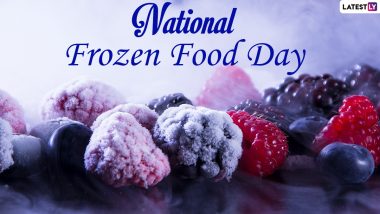 National Frozen Food Day was established on March 6, 1984, by then US president Ronald Reagan. Since then, this day has been observed every year with appropriate ceremonies and activities. You should indeed stock up your freezer with frozen foods on National Frozen Food Day 2021. You can enjoy this day by eating frozen food in every meal. It must be noted that freezing food slows down decomposition by turning residual moisture into ice, inhibiting the growth of most bacterial species. Let us learn some more interesting facts about frozen foods below.

1. Freezer burn happens when colour changes occur in properly frozen food. It is not a matter of worry as freezer burn is just the result of air hitting frozen food and allowing the ice to sublimate.

2. Frozen foods depleting them of its nutrient is just a myth.

3. Frozen foods do not require any added preservatives to keep them safe and consumable as microbes do not grow on any food that is at a temperature less than zero degrees Fahrenheit.

4. According to nutritionist Caroline Passerrello, the spokeswoman for the American Academy of Nutrition and Dietetics, food that is frozen can stay unspoiled indefinitely.

5. The technique of freezing food was first applied to industrial food sales sometime in the 1800s when a wily Russian company froze a small quantity of duck and geese and shipped them to London.

6. Carl Paul Gottfried Linde, an engineer, scientist, and professor at the Technical University of Munich, is considered the father of frozen food as he helped pioneer industrial cooling known as the Hampson-Linde cycle.

7. Clarence Birdseye introduced the concept of flash freezing to the world. Birdseye developed his technique after seeing food freezing in action in the Arctic, and noting how better-frozen fish tasted if it had been frozen immediately.

8. The first frozen food was sold commercially in the United States on March 6, 1930. Birds Eye frozen foods were first put on sale at Davidson’s Market in Springfield, Massachusetts.

9. In 1945, Maxson Food Systems introduced “Strato-Plates” a meal that was created specifically for consumption on aeroplanes. This was considered as the first frozen meal.

10. Conagra Foods introduced its Healthy Choice line of frozen food back in 1989 after its chairman, Charles Harper, suffered a heart attack due to his bad eating habits.

11.  The Celentano brothers, who owned their own Italian speciality store in New Jersey in the 1950s, are believed to have marketed the first frozen pizza in 1957.

On National Frozen Food Day 2021, make your own frozen food meal. You can also invite your friends for TV dinners, which is a famous American frozen meal having plastic trays filled with a complete meal meant for eating in front of the television.

(The above story first appeared on LatestLY on Mar 06, 2021 10:36 AM IST. For more news and updates on politics, world, sports, entertainment and lifestyle, log on to our website latestly.com).