Beyoncé on Vogue Cover: The Icon Talks About A Rare Pregnancy Complication She Faced During Her Twin Pregnancy

During her recovery she embraced being curvier and took care of her body with a lot of self-love. 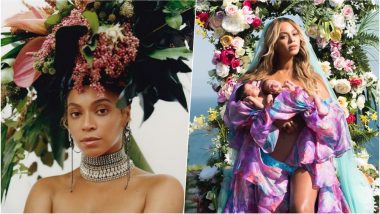 Being the first African-American on Vogue’s September issue, the legendary singer Beyoncé talks about her body, pregnancy, career and her legacy. But most importantly she has a message for all those new mothers who are worried about their weight post-pregnancy, self-love and self-care and embracing your body the way it is. She also talks about appreciating your natural body and giving it time to heal from all the wear and tear your body goes through during pregnancy. Beyoncé explains that her second pregnancy with the twins didn’t go as expected and put her and her children’s life in danger.

The 36-year-old singer in her interview talks about how society perceives your body to look after pregnancy and she how put pressure on herself to lose all the baby weight in just three months post her first pregnancy. She thinks that was crazy and approached things differently the second time around. “I was 218 pounds the day I gave birth to Rumi and Sir. I was swollen from toxaemia and had been on bed rest for over a month. My health and my babies’ health were in danger, so I had an emergency C-section. We spent many weeks in the NICU.”

Toxemia, also known as preeclampsia is a pregnancy condition characterised by high blood pressure and signs of damage to another organ system, according to Mayo Clinic. If left untreated, preeclampsia can lead to serious, even fatal complications for both you and your baby. The only cure is delivery of your baby. Beyoncé says that she wasn’t aware of this condition until months later and that she was in a survival mode. “Today I have a connection to any parent who has been through such an experience,” says the singer.

Six months after delivering twins, Beyoncé started preparing for her Coachella performance. During her recovery she embraced being curvier and took care of her body with a lot of self-love. “I became vegan temporarily, gave up coffee, alcohol and all fruit drinks. But I was patient with myself and enjoyed my fuller curves. I think it’s important for women and men to see and appreciate the beauty in their natural bodies.”

Beyoncé is in no hurry to get rid of her pregnancy weight as she feels it’s real. “To this day my arms, shoulders, breasts and thighs are fuller. I have a little mommy pouch. I’m in no rush to get rid of it. I think it’s real. Whenever I’m ready to get a six-pack, I will go into beast zone and work my ass off until I have it. But right now, my little FUPA and I feel like we are meant to be.” She also talks about the ups and downs in her life and that she is grateful for every scar.

(The above story first appeared on LatestLY on Aug 07, 2018 11:19 AM IST. For more news and updates on politics, world, sports, entertainment and lifestyle, log on to our website latestly.com).