Human Papillomavirus (HPV): Causes, Symptoms and Treatment of the Most Common Sexually Transmitted Infection That Can Lead to Cancer

According to WHO, the main target group recommending HPV vaccination in most of the countries are young adolescent girls 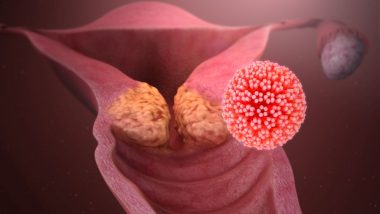 Everything you want to know about HPV. (Photo Credit: Wiki Commons)

Human papillomavirus (HPV) is on a rise. The global burden of HPV has increased especially among women. According to WHO, HPV infection that is a leading cause of cervical cancer is the second most common cancer in women worldwide. According to statistics by WHO, in the year 2008, there were an estimated 529,000 new cases and 274,00 deaths due to cervical cancer. Moreover, there occurs above 85 % of cervical cancer deaths in developing countries and it accounts for 13% of all female cancers. HPV Virus Causes 99% of Cervical Cancers! Is HPV Test More Accurate Than Pap Smear in Cancer Screening?

What is Human papillomavirus (HPV)?

A viral infection passed between people through skin-to-skin contact, HPV has more than 100 varieties. Out of these 100, 40 passes through sexual contact and can affect your mouth, genitals, or throat. As per the Center for Disease Control and Prevention (CDC), Affecting both men and women, HPV is the most common sexually transmitted infection. HPV is extremely common so much so that every sexually active people will get at least one variety of it at some point in time.

What are the causes of HPV?

HPV is contagious, here are a few factors that contribute to the higher risk of contracting HPV.

1. Direct sexual contact, for example, oral sex- HPV is an infection that is caused by a skin-to-skin contact and one doesn't require an intercourse to contract HPV.

2. Pregnancy: Very rarely, a mother who has HPV may cause an HPV infection to her baby during delivery.

4. Partners who have had multiple previous sexual partners. (Especially unprotected)

5. Tobacco and alcohol use.

7. Viral infections such as HIV or herpes.

Important to note that Cancers caused by HPV mostly don’t show symptoms until cancer has progressed to the later stage.

Also that many times HPV occurs with no symptoms at all.

There are various treatment options available for HPV-

Cryotherapy – The most common method is the Cryotherapy. For this liquid nitrogen is used to freeze warts and then soon the wart falls off. Sometimes this can even painful.

Cautery – electrical current is used to burn the lesion of which laser therapy is also an alternative.

Chemical treatments – Topical or injected drugs can also be used to alter the immune response to the HPV virus. It may also kill abnormal cells.

Surgery – Warts large in size can be removed via surgery.

According to WHO, the main target group recommending HPV vaccination in most of the countries are young adolescent girls, therefore, it is important that you and your daughter should both screen yourself timely.

(The above story first appeared on LatestLY on Oct 26, 2018 08:30 AM IST. For more news and updates on politics, world, sports, entertainment and lifestyle, log on to our website latestly.com).