Is Your Cell Phone Dangerous to Your Health? 42% Adolescent Girls Allowed Access to Mobile Phone for Less Than an Hour a Day: Survey 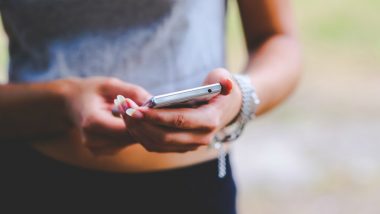 New Delhi, January 23: A new survey has found that about 42 per cent adolescent girls are allowed access to a mobile phone for less than an hour in a day with most parents feeling that they are "unsafe" and an "unhealthy distraction" for them. Centre for Catalyzing Change (C3), a New Delhi-based NGO, in association with Digital Empowerment Foundation (DEF) conducted the survey in 29 districts of 10 states with 4,100 respondents to understand digital access to young girls in India.

The survey found that there is a crisis of access to digital devices for adolescent girls in India.

"Boys have easier access. In Haryana, the gender gap is the widest, while Telangana reported the lowest difference between the percentage of boys and girls having digital access (12 per cent)," it said.

The survey said family attitudes and biases restrict the time given to girls to access a digital device – 42 per cent of girls are allowed access to a mobile phone for less than an hour in a day.

And on top of this, the survey found that 65 per cent of teachers and 60 per cent of community organisations say being a girl is a factor in accessing digital technology. Most parents felt that a mobile phone is "unsafe" and an "unhealthy distraction" for an adolescent girl, the survey said.

"Even when families and adolescents can afford smartphones, computers or other digital devices, it is always the male family members' usage of such devices that is prioritized," the survey found.

Noting that financial affordability is a major cause for lack of access, the survey said 71 per cent of the girls do not own a mobile phone because they cannot afford it.

"81 per cent of families say they cannot afford one, while 79 per cent do not have a computer at home," it said. Access to digital modes in community facilities like schools, community centres and internet cafes is limited -- 83 per cent of the girls get less than an hour's access in a week, the survey said.

The survey found that girls also remain at a distinct disadvantage when it comes to digital literacy as only 32 per cent of adolescent girls know how to "receive calls" on a mobile. About 26 per cent know how to "use features like clock, calculator, torch and other offline apps", it said. Srishti Goswami, Haridwar Teen, Set To Become One-Day Chief Minister of Uttarakhand on January 24 To Mark National Girl Child Day 2021.

"A mere 15 per cent know how to use online apps and 16 per cent of parents said their daughters had no knowledge of computers," the survey said. Releasing the findings of the survey to mark National Girl Child Day, Dr Aparajita Gogoi, Executive Director, C3 said the COVID-19 pandemic has exacerbated the inequalities girls in India face.

"The aim of our survey has been to suggest a framework to address the everyday challenges adolescent girls experience in owning, accessing, understanding and using digital technology," she said.