Studies indicate that the chances of depression in adolescents after gastric banding are high. 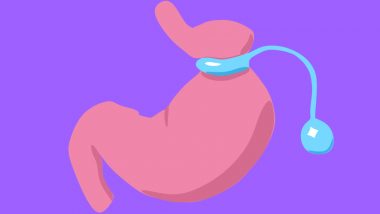 An eight-year-old girl from Mumbai, Zoya Khan, became the youngest person in the city to have undergone two weight loss surgeries. According to a news report in The Hindu, the doctor who operated on the young girl has said that she has already lost 7.6 kg in 20 days. But that’s not the only visible difference in her after the surgery. Her mother revealed to the newspaper that it was the first time she walked with the help of a walker. Before the surgery, all she could do was crawl or stand up with support.

When she was only 11 months old, she weighed a whopping 19 kg. A sleeve gastrectomy at that age didn’t help as she kept gaining weight due to her uncontrolled eating. As a corrective measure, doctors put a non-adjustable silicon ring around her stomach last month to control the size of her stomach. The efforts paid off as Zoya knocked off 7.6 kg and came down to a 32 kg from 39.6 kg. Woman Who Lost 100kgs After Weight-Loss Surgery Commits Suicide Because She Was Depressed With Her Slim Figure.

Dr Mohit Bhandari who carried out the revision surgery at MPCT Hospital in Navi Mumbai told The Hindu that it would take nearly six months for Zoya to come down to her normal weight and about three more years to walk properly.

Since she’s not accustomed to walking due to her weight, her leg muscles are bent. With the use of a push knee brace and a customised walker, Zoya may be able to walk normally in time. Her diet of chips, biscuits, chocolates and ice cream has been replaced by a liquid diet comprising juices, soups, milk and pureed food. Her case defies all odds because bariatric surgery in children is a polarising topic in the medical community.

Childhood obesity has become a widespread problem, leaving the young ones vulnerable to diseases and early mortality. Adolescent bariatric surgeries are said to have similar results as those of adults, with sustainable weight loss and reduced complications.

To qualify for the surgery, the patient should be severely obese with a BMI over 40 and have failed at conventional methods to lose weight. They should pass a psychological evaluation test before and should be committed to comprehensive pediatric psychological evaluation — children who also have comorbid conditions like diabetes, sleep apnoea, urinary incontinence and severe psychosocial distress to qualify for the surgery.

Why is Bariatric Surgery Considered Unsafe in Children?

Childhood obesity is a pressing problem in the world today. But despite its prevalence, doctors are still not convinced about surgery as an option to tackle it. Although there are cases of bariatric surgeries performed on patients as young as five, evidence in support is still scarce and inconclusive.

Children and adolescents are also developing physically and mentally. A surgery at such a young age may alter their development and the course of their lives.

A study in the Lancet by Han et al. says, “The risks of bariatric surgery are considerable. Its long-term safety and efficiency in children remain largely unknown. Therefore, surgery should be reserved for only the most severely obese and even then, considered with extreme caution.”

The psychological effects of bariatric surgery in the young are even more profound. Studies indicate that the chances of depression in adolescents after gastric banding are high.

When they gain weight even after surgery, people can feel shame and guilt, which adds to the obesity burden. Some studies also point towards an increased incidence of teenaged pregnancies two years after bariatric surgery in female adolescents.

The issue also opens up the moral challenges of the procedures since children are too young to understand or give consent to bariatric surgery fully.

(The above story first appeared on LatestLY on Jan 08, 2019 05:50 PM IST. For more news and updates on politics, world, sports, entertainment and lifestyle, log on to our website latestly.com).