Kareena is also all set to mark her debut as an author with a book titled Kareena Kapoor Khan’s Pregnancy Bible. Kareena described the book as a guide for mothers-to-be which will help them prepare for the months ahead. 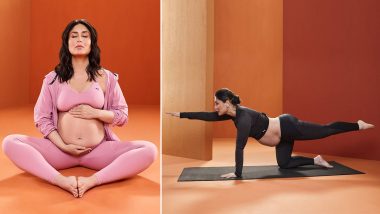 Kareena Kapoor Khan has been sharing every detail about her whereabouts ever since she announced her pregnancy. The actress is making most of this time and has not let the pregnancy come in between of her work. The actress shot for a few episodes of her show What Women Want in the recent months and picked up several projects along with it. She has featured in several commercials and was also a part of a brand photoshoot. Kareena Kapoor Khan Oozes a Rs.41,500 Worth of Comfort Chicness With Her Rajdeep Ranawat Ensemble!

Kareena shared a few pictures from the photoshoot and we have to say that she is serving some major pregnancy goals in them. The pictures show Kareena striking some yoga poses as she flaunts her stunning black athleisure wear. Kareena looks calm as ever in these pictures and the pregnancy glow is unmissable. The black crop top and leggings look comfortable on Kareena as she stretched and posed for the photos. In another post, Kareena is seen cradling her baby bump as she shows off her pink athleisure wear from the same brand. Check out the pictures below.

Earlier, during an interview with TOI, Kareena had shared her thoughts about pregnant women going to work and said, “I have never been that kind of a person who would sit at home and say, ‘Now I want to put my feet up’. I am doing what I want to do. Working — whether it’s during my pregnancy or post-delivery — has been a point to just say that when has anyone ever said that pregnant women can’t work? In fact, the more active you are, the healthier the baby is and the happier the mother is.” Kareena Kapoor Khan Makes Yet Another Compelling Case for Maternity Style, This Time Its a Chic Ethnic Ivory Dress!

Kareena is also all set to mark her debut as an author with a book titled Kareena Kapoor Khan’s Pregnancy Bible. Kareena described the book as a guide for mothers-to-be which will help them prepare for the months ahead. She added, "It will describe all the medical aspects of pregnancy with a focus on the mother and her symptoms, and include the actress’s tips on everything from managing morning sickness to pregnancy diet, exercise, wellness and preparing a nursery." Kareena had announced a pregnancy memoir on Taimur's birthday last year in 2020.

(The above story first appeared on LatestLY on Jan 25, 2021 06:47 PM IST. For more news and updates on politics, world, sports, entertainment and lifestyle, log on to our website latestly.com).