Everyone has something to say these days and the access to Information and Communication Technology (ICT) has equipped everyone with the avenues to speak... loudly and as frequently as they wish. Consequently, the digital and real worlds are both quite chaotic and noisy places. It can be challenging to sort through the noise and find substance. 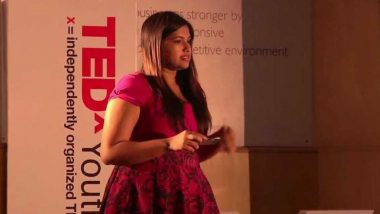 Everyone has something to say these days and the access to Information and Communication Technology (ICT) has equipped everyone with the avenues to speak... loudly and as frequently as they wish. Consequently, the digital and real worlds are both quite chaotic and noisy places. It can be challenging to sort through the noise and find substance. But if you happen to stumble upon anything written by Sharanya Haridas, you have struck gold!

Once you’ve had a glimpse of what Haridas is capable of you’ll see that she’s both brilliant and multi-talented. In addition to her job as a writer, Haridas is also a journalist, editor, e-commerce expert and marketer whose global influence is growing at a remarkable pace. Though she is based in New York City, she still maintains a strong connection with her Indian roots. A number of her writings delve into Indian themes and concerns.

Haridas’ academic accolades come from a variety of illustrious institutions including The Indian Institute of Technology in Madras, where she earned her Master of Arts degree and Columbia University in New York where she earned her Master of Science degree. Her academic career has been characterized by excellence at every turn. At the Indian Institute of Technology, she distinguished herself in many ways, including becoming the founder of a magazine that was highlighted for being both revolutionary and impactful. At Columbia University, her brilliance continued to impact others resulting in her being elected by her peers to become a member of the Society of Professional Journalists.

She is the founder of the magazine ‘That’s So Gloss’, the first webzine in India for young women. Haridas is undoubtedly a world class writer. Her work has appeared on some of the most eminent digital platforms around the world. International media powerhouses such as Forbes Magazine have published her writing. Powerful digital publications like Buzzfeed and Huffpost have also featured her work.

In addition to articles and news items, Haridas also writes books. Among the titles that bear her name are: ‘India’s Generation in Transition’ (2012), ‘The Tramp Speaks’ (2010) and ‘Poetry India - Voices in Shade and Sunshine’ (2016). Haridas also has writings published and featured on Goodreads, Booktopia, Barnes and Noble and kobo.com.

A Giant in the Digital World

Haridas’ digital presence is just as powerful as her work. She has made her mark on numerous digital platforms. The whopping 13, 000 followers she has on Facebook so far, helps to verify the powerful nature of her work. On Instagram Haridas has over 7000 passionate followers who place a high value on her work.

She has an extensive background in e-commerce and business, having led marketing at Nimble Commerce in New York City and supporting marketing at Blackhawk Network in the San Francisco Bay area and most recently held the position of Marketing Principal at Blackbuck (Zinka Logistics Solutions Pvt. Ltd.)

If you are impressed by the volume of Haridas’ achievements so far, brace yourself because there is more to come. Haridas is dedicated in her ability to build a powerful career and so she consistently conceptualizes and releases pieces that are sure to hold readers and audiences spellbound. Haridas is, without a doubt, an embodiment of excellence in journalism, writing and corporate affairs.