The world of boxing has created a unique universe in which any boxer can find itself at the forefront of its industry simply by knowing how and when to strike. DK MONEYY is a rising upcoming boxer who boxed on live television pay per view for his debut fight. 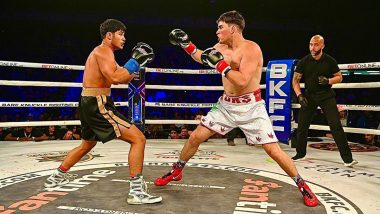 The world of boxing has created a unique universe in which any boxer can find itself at the forefront of its industry simply by knowing how and when to strike. DK MONEYY is a rising upcoming boxer who boxed on live television pay per view for his debut fight. DK MONEYY vs Nick Ireland was a crazy fight and a very controversial fight on who won? The power belongs to individuals capable of shifting and influencing the public opinion, that’s story of his first fight.

If you cannot see yourself as a winner, then you cannot perform as a winner. Only after his first fight, DK MONEYY has done work far beyond his age. In fact, he already holds the keys to his own empire. DK MONEYY superStar boxer is in talks with potentially fighting Landon Mcbroom in the near future.

After establishing himself as an authority in the social media world, he sought out a way to diversify and came out as a boxer. DK MONEYY is a YouTube and TikTok star who transitioned to become a star boxer and boxed Nick Ireland on live pay per view.

DK MONEYY’s background illustrates just how passionate and talented he is. Seemingly living on a fasttrack, he’s grown up knowing how to bring eye-catching value to the table while still being attentive to detail. Always a fierce competitor, DK MONEYY was born on March 14th 1997 makes his boxing debut on bare knuckle pay per view, on the same card as Blue Face and Paige Vanzant.

Offering a combination of natural athleticism and an easygoing intelligent manner, he has played football and had d1 scholarships and then it all came to an end due to surgery. But he took a risk and bet on himself, opting to forego attending some of the most prestigious academic institutions in the world in order to pursue a career in entrepreneurship and the growing tech space. He started YouTube and tiktok a year back and was able built to over a million followers in a short amount of time

Now a renowned digital star on social media, he started boxing just a month back and already got a pay per view fight on the same card as Paige vanzant on Bare Knuckle 19! BKFC19 and he performed super well and already in talks for another fight.

When asked about his personal life, DK MONEYY shared that “he also loves going to the beach and training boxing and getting into great shape !”

People at the forefront of any industry will take you more seriously and want to build meaningful relationships with you if you bring clear cut value to the table. And that’s just what DK MONEYY does. He wants to take boxing very serious and eventually box the biggest social media Influencers in the world. While these are all potential options, only time will be able to tell us what to expect of the future of boxing. And whatever that future may hold, expect to see DK MONEYY at the forefront of it.