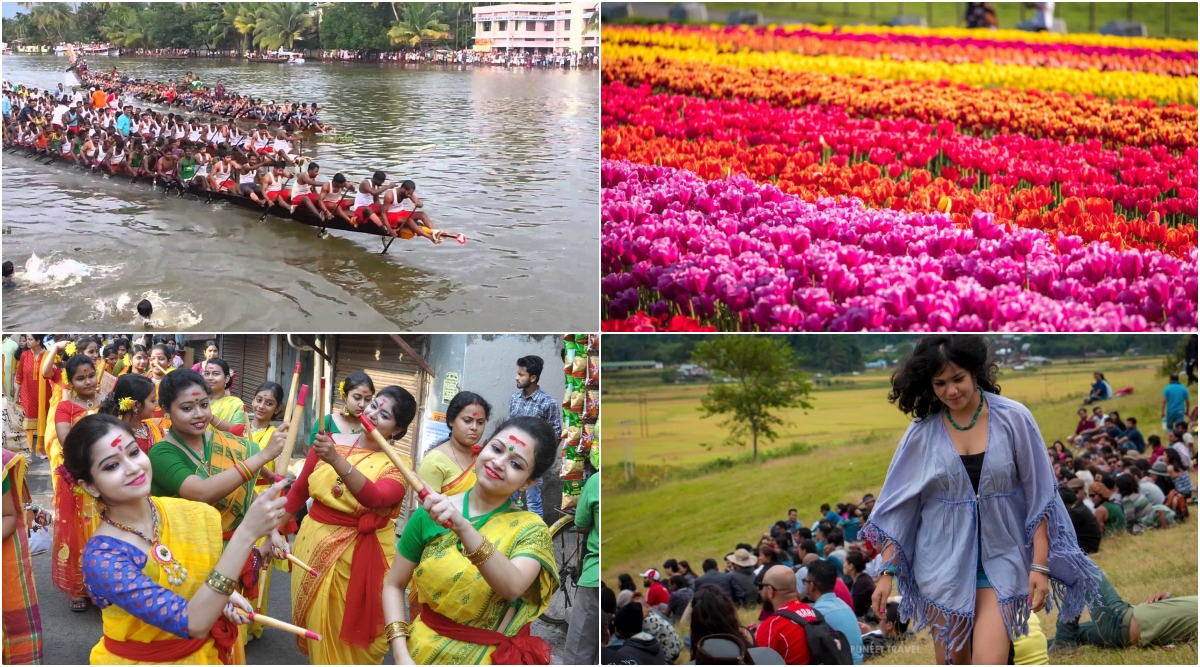 New Delhi, January 1 (IANSlife): If you're an art and cultural junkie we map out the next twelve months of the year, so you can culture-hop from city to city. In the past decade, Indians are suddenly seeing newer fests grabbing the headlines, many of them interestingly enough, are held in tier-2 and tier-3 cities. This provides an escape from the maddening crowd to residents of claustrophobic metropolitans.

An increased disposable income amongst the youth, corporate culture and the millennial need to be on the move constantly has resulted in short breaks being in vogue around the year. It is mostly art and cultural festivals that are riding the wave for the wholesome experience that these fests promise; precipitating an increased footfall. New Delhi World Book Fair 2020 Themed 'Gandhi: The Writers' Writer' Opens From January 4–12.

The most striking and welcoming aspect of these festivals is the fact that they are not restricted to the elite few but welcome people across classes, age groups and gender. And for all the cynics out there, well, try booking a room in Jaipur, Kochi, Goa or Dharamshala when the Jaipur Literature Festival, Kochi Biennale, Serendipity Arts Festival or Dharamshala International Film Festival is on. This following list of festivals is gaining popularity not just in India but across the world; will you be there?

The world's largest free literary festival, the Jaipur Literature Festival, founded in the year 2006 has grown bigger in scale with every passing year. This year will witness some of the biggest names in literature spellbinding an audience that descends to the city comes from across the country and abroad.

Look Around: Steal a day to check out the architectural marvels in Jaipur and surrounding places.

The 12th edition of India Art Fair, in partnership with BMW Group India, will bring forth the best in South Asian modern and contemporary art. Live performances and talks will also be held during the show, which is attended, by art aficionados and members of the public from India and abroad. This year's memorial lectures will be dedicated to the life and works of modernist Ram Kumar and artist Tushar Joag conducted by experts Kishore Singh and Shireen Gandhy respectively.

When: January 30 to February 2

Where: NSIC Grounds in New Delhi

Look Around: From monuments like Red Fort to Old Delhi's street food, the Indian capital has something for everyone.

Just the perfect place to seep in the best of traditions from far-off corners of India, this mela boasts of diverse exhibitions of handicrafts and handlooms. One of the largest crafts exhibitions of the world where state-specific and even international performances are held at open-air theatres, it is a perfect place for the whole family. This time, the theme state is Himachal Pradesh. Of course, don't forget to binge on the cuisine from varied Indian territories.

Look Around: Those of you coming from different parts of the country should check out some well-known places in Delhi including Qutb Minar, Jantar Mantar, and by-lanes of Old Delhi

A multi-cultural festival that boasts of amalgamation of various activities including art displays, plays, dance performances, music and food offerings for a wholesome experience, the Kala Ghoda Arts Festival should definitely be on your list for this year.

When: February 2 to February 9

Look Around: An interesting cosmopolitan, which accommodates both slum dwellers and some of the richest people in the world. Do make it a point to go in for a guided tour to Dharavi, the world's largest slum which will demolish all your preconceived notions of slum life.

Over the years, not just Sikhs from across the country and the world, but also people from other religions have started making a beeline for the Holla Mohalla festival that was started in the 18th century. Promising to offer a glimpse into the rich traditions and culture of Sikhism, this is a definite treat for all senses. Get set to witness martial arts and war drums performances amidst colours, horse-riding skills and other displays during the celebrations.

Look Around: Anandpur and surrounding areas boast of some beautiful Gurudwaras. Those of you wanting to get a glimpse of village-life should check out the many villages surrounding the area.

Look Around: Check out Tagore's Aashram and the art galleries.

They say tulips always do the trick. Let this annual festival be an excuse to visit Kashmir, one of the most beautiful places in the world. Overlooking the picturesque Dal Lake the huge range of tulips including golden, striped, purple, red and orange is bound to overwhelm you. Remember, they bloom only for two weeks, so get your tickets booked much in advance.

Look Around: Hire a cab and head to places like Gulmarg and Pahalgam, some of the best-known tourist destinations of the region.

Celebrated by the Konyak tribe of Nagaland, which has a history of being headhunters but is now engaged in farming, this festival marks the settling down of the spring season. If you dig ethnic wear and need every occasion to buy accessories, this is just the right fest for you. Tribal dances, music and Naga food make Aoling a must see.

Look Around: Tuensang, which is flanked by Myanmar on its right.

What can be a better occasion to visit God's own country than during Thrissur Pooram? Witness the grand procession of 30 elephants with more than 250 musicians. This is something you need to experience to understand the effect. Not just this, the festival also boasts of varied cultural performances, music performances, displays and dances. Don't forget to see the elaborate fireworks.

Where: Vadakkumnathan Temple of Thrissur in Kerala

Considering the soaring mercury in the plains, this festival promises an excellent respite. Fold dances, boast racing to Sham-e-Qawwali.

You really don't have to be religious to derive satisfaction from religious festivals. The cultural angle in most Indian religious festivals make them popular with people across faiths, and the Rath Yatra in Orissa is one such example. Deities - Lord Jagannath, Lord Balabhadra and Goddess Subhadra, of the main Jagannath temple of Puri, are removed with the celestial wheel and taken to their chariots, which are the avenue of Gundicha Temple. Not just devotes, but people from around the world descend to witness the grand celebrations.

Look Around: Puri has some beautiful temples. Also, you can drive to Konark, which is a few hours away.

Being regularly held at the Queen of Hills since 1960, this festival has something for everyone - from music concerts, fashion to food, this festival is very popular among people from across Himachal. Those wanting a break from the monsoons in the plains should definitely uphill for this.

When: First Week of June

Look Around: Shimla has some popular spots like the Mall Road. Those who like reading ghost stories should check out the so-called haunted spots in Sanjauli. Popular tourist destination Kufri is just a few hours away.

Commemorating the birth of Guru Padmasambhava, who founded Tantric Buddhism in Tibet, this two-day festival has become very popular over the years among both Indian and foreign tourists. People from all over come to see the elaborate masked dances performed by lamas dressed in elaborate costumes.

Look Around: The Hemis National park has beautiful landscapes while the city of Leh has lots of cafes and bakeries to try out.

Kerala's oldest snake boat race, this one is popular with people across generations. An elaborate set-up, comprising processions and decorated boats, photographers from around India and abroad come to capture this.

Where: Pampa River at Champakulam

Look Around: The backwaters of Kerela are rich in flora and fauna for some bird spotting. You could even sign up for a Yoga course with some of the best centres based in Kerela.

Let's give culture a break and talk about the Malabar River Festival held by Kerala Tourism. This year will see the 8th edition of South India's only extreme adventure competition, which has been nominated one of the five best whitewater kayak festivals in the world by the French Kayak Session Magazine. Bringing together kayakers from more than 15 countries, the event boast of different categories including Extreme Race, Giant Slalom and Boater Cross.

No, you really don't have to be a participant to get a kick out of this. Just being part of the audience also promises a great adrenaline rush.

When: Exact dates to be announced

Where: Iruvanjhipuzha and Chalipuzha rivers at Thusharagiri, Kozhikode district, Kerala.

Look Around: The soothing backwaters promise to soothe your nerves after witnessing the event.

A major annual festival for Malayalis, Onam is a harvest festival, which is celebrated elaborately in Kerala. Visiting the state during this period makes all the sense as it is the perfect time to witness cultural events like tiger dances, boat races, mask dances, music, martial arts and plantain offerings. Major festivities take place across 30 venues in the state capital.

When: August 22 to September 2

Get set for a three-day-long festivity of music and dance organised in the laid-back and relaxed Pondicherry. What is striking about this festival is the amalgamation of western and eastern culture at one place. Different performances, competitions and exhibitions are held during this festival

Look Around: Laze out at the beach or go and visit the beautiful international township of Autryville close to the city.

A spellbinding valley located around 170 Kms from Arunachal Pradesh's capital Itanagar, the Ziro Valley has been a UNESCO World Heritage Site nominee for many years now. The annual Ziro Festival of Music held here boasts of some of the finest independent musicians from across the country and the world taking to the stage. Promising a festive atmosphere, complete with folk musicians from the Northeast of India in their elaborate gear, this is a must-visit fest in September. But remember, you need the Inner Line Permit (ILP) for this area.

This three-day long festival promises to be a treat for all bookworms and all those star-struck by writers. The event will witness conversations, talk shows and book releases.

Also known as RIFF Jodhpur, the Mehrangarh Museum Trust and Jaipur Virasat Foundation have partnered to treat people to this unique festival held in exotic Rajasthan which features participation by major musicians. In fact, UNESCO also endorses the fest.

When: October 29 to November 2

Folk music, centring on the lifestyles of Rajasthan's rulers is the main attraction of this fest. Besides this, camel shows, horse riding, polo, and traditional puppet shows are also organised. Performers sing songs remembering the state's heroes and myths of the region.

Over the years, this festival in Himachal Pradesh's small town has become increasingly popular with people from across the country and abroad. Besides being a well-curated fest, the air of informality and intimacy makes it extremely popular.

Look Around: An interesting market to buy Tibetan items and several trekking routes.

Just bought a DSLR and raring to frame something fantastic? Well, head straight for this fair frequented by both top and amateur photographers from around the world. Attracting more than two lakh visitors, there is much more to the fair than just camels. From snake charmers, camel racing to a camel beauty contest, this event will surprise you no end.

A huge number of pilgrims also come to bathe at the Pushkar Lake during these days.

Get set for Asia's biggest festival of contemporary art where Indian and international artists will showcase artworks across mediums including sculpture, painting, performance and new media. Artist Shubigi Rao will curate the fifth edition of the Biennale.

When: Starts from December 12

Look Around: Backwaters; and if you have time, don't miss a short trip to Coorg, a beautiful unspoilt hill-station.

Get a glimpse of North-East India and the peculiar culture of Nagaland with this festival. Different Naga tribes showcase their traditional dances, music and artefacts during Hornbill. A must-visit for those willing to try out different cuisines.