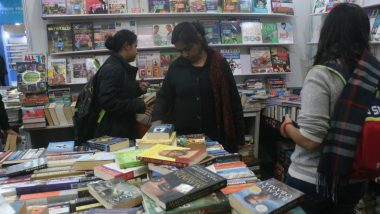 New Delhi, January 2: The 28th edition of the much-attended New Delhi World Book Fair (NDWBF) will open at the Pragati Maidan here on Saturday. Marking Mahatma Gandhi's 150th birth anniversary, it is themed 'Gandhi: The Writers' Writer' and will host over 600 exhibitors. Organised by National Book Trust, in association with ITPO, the 2020 edition of the Fair runs from January 4 to 12. Malala Yousafzai, Symbol of Education in Pakistan, Features in MHRD Quiz on WBF2020; Twitter Post Gets Deleted After Flak.

NBT Chairman Govind Prasad Sharma said that this edition would highlight the various facets of Mahatma Gandhi's life and his influence on writers of all ages. "The theme is an attempt to give booklovers a glimpse of how Mahatma Gandhi, a great strategic communicator, inspired and influenced generations of writers and how the writers understood and emulated Gandhiji in words. In the specially designed pavilion (inspired by Sabarmati Ashram), with hand-spun materials as wall cladding; there will be an exclusive exhibition of 500 books of 100 publishers on and by Gandhi in different Indian languages, as well as 30 panel discussions, book launches and performances related to the theme," NBT said.

This year, over 600 exhibitors in different languages including Bangla, English, Gujarati, Hindi, Maithili, Malayalam, Punjabi, Sanskrit, Sindhi, Tamil, Telugu and Urdu will exhibit their books in over 1300 stalls at the Fair. Books to Read in 2020: ‘More Myself: A Journey’ by Alicia Keys to ‘Irrfan Khan: The Man, the Dreamer, the Star’ by Aseem Chhabra, 10 Books to Look Forward to in New Year.

Along with business sessions, several literary and cultural activities including seminars, book release functions, and panel discussions, will be part of the Fair. It will also see participation from about 20 foreign countries including China, Denmark, Egypt, France, Germany, Iran, Nepal, Poland, Saudi Arabia, Spain, Sri Lanka, the UAE, the UK, and the US.

Vistors can be part of literary events, discussions, conversations with authors, book launches, children's activities, film screenings and cultural programmes. The NBT, in collaboration with the All India Confederation of Blind, has published a set of 250 books in Braille for visually impaired readers. A special exhibit of these books will also be put up.

As per the organisers, the Fair will feature a children's pavilion to promote books and reading among children and young adults. Open to the public from 11 a.m. to 8 p.m. and with free entry for school children in uniform, senior citizens and differently-abled, the fair will be inaugurated by HRD Minister Ramesh Pokhriyal 'Nishank' on Saturday.

(The above story first appeared on LatestLY on Jan 03, 2020 10:56 AM IST. For more news and updates on politics, world, sports, entertainment and lifestyle, log on to our website latestly.com).