The way the police tried to take her away was very violent and the woman was screaming, "You’re sexually assaulting me!" The entire arrest was captured on camera and the video soon found its way online. The viral video clearly shows the tourist being manhandled by the police as they dragged her away. 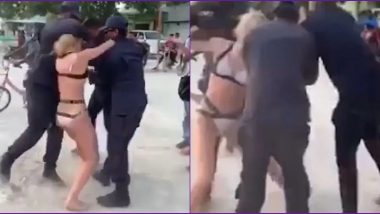 The Maldives is known for having some of the best beaches, with crystal clear waters, clean sand and beautiful views. And although it serves a perfect setting for beachwear and bikinis, there are some strict rules to follow. A British tourist had one of the worst experiences when she wore a bikini to a public beach on one of the islands. The tourist was arrested by police for "indecent exposure." Moreover, the way the police tried to take her away was very violent and the woman was screaming, "You’re sexually assaulting me!" The entire arrest was captured on camera and the video soon found its way online. The viral video clearly shows the tourist being manhandled by the police as they dragged her away. After the video went viral, the police commissioner has issued an apology. Boyfriend of Woman Fined for Wearing String Bikini on Philippines Island Lashes Out: ‘Why Was It Sold in a Local Shop?'

The incident took place on the island of Maafushi, in the Kaafu Atoll. The woman was reported to be under the influence of alcohol. She wore a two-piece bikini to the beach. But the police however, did not care and severely manhandled her while making an arrest. The woman tried to resist and can be heard shouting, "You are sexually assaulting me." While two men tried to put handcuffs around her, a third one came in with a sarong-like cloth and covered her back, while the police led her away from the scene. Although she was released that same day around 7 p.m., the dealing with the situation has irked many. Video of Child Pooping and Mother Burying Diaper on Boracay Island Beach Goes Viral, Authorities Cordon Off Beachside for Clean-up.

Watch Video of Police Manhandling Woman in Bikini at the Maldives:

The video is going viral after it was shared on other social media platforms too. Several people commented on the ways police tried to deal with her. Others questioned if there are no female police in the team. Check some of the reactions.

This is wrong on so many levels. Yeah she is disrespecting the culture. But this should be handled by females not men.

Nowhere in the law allows to be manhandled like this????? Yes what she did was very disrespectful to put culture and locals but they could have handled it better wtf

Not an Appropriate Way

Not the most appropriate way to handle an unarmed person, especially considering that she's just a disobedient female tourist. Could have handled better without wrestling her down.

The police commissioner Mohammed Hameed later tweeted an apology to the tourist mentioned that he has taken up the challenge to professionalise the police service.

Incident in Maafushi in which our officers restrained a female tourist seems to be badly handled. I apologise to the tourist & the public for this. The challenge I have taken up is to professionalise the police service & we are working on that. This matter is being investigated.

Wearing a bikini is permitted in the popular tourist location but not away from the resorts. It is strictly prohibited on the local islands. "We would like to remind the many visitors who come to our country to be mindful of local sensitivities when visiting inhabited islands," the police told in a report.

(The above story first appeared on LatestLY on Feb 08, 2020 07:30 PM IST. For more news and updates on politics, world, sports, entertainment and lifestyle, log on to our website latestly.com).