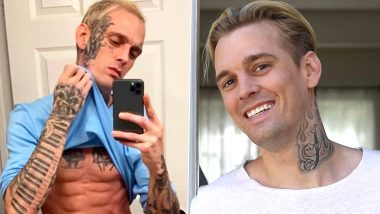 The couple has had quite an eventful romantic life. They got engaged in June and Aaron soon grabbed headlines for getting a giant tattoo of Melanie’s name. In March, however, the rapper was arrested after domestic violence  allegations against him were filed.

They also suffered a miscarriage in June and  although it was devastating news, the couple came back together. Aaron Carter has stunned his fans with a new face tattoo. Aaron flaunted his girlfriend Melanie's name, written in cursive, and three crescent moons inked across his cheekbone. Aaron Carter’s tattoo has made headlines earlier back in September 2019, he got a face tattoo amidst feud with his family.

(The above story first appeared on LatestLY on Sep 05, 2020 06:34 PM IST. For more news and updates on politics, world, sports, entertainment and lifestyle, log on to our website latestly.com).