Adorable Dog Who Ran Away with Mic During Live Weather Broadcast Reunites with Reporter Leaving Netizens in Love with the Viral Video!

Dogs can turn anything into the most adorable experience. In one of the incidents that became the sweetest moment on the internet, an adorable dog ran away with a reporters mic who was amid a weather live broadcast in Russia. 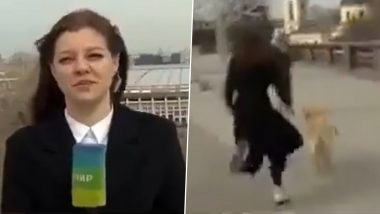 Dogs can turn anything into the most adorable experience. In one of the incidents that became the sweetest moment on the internet, an adorable dog ran away with a reporters mic who was amid a weather live broadcast in Russia. However, this adorable interruption on camera soon became the netizens' favourite part of their day as the video went viral. And not just that, in yet another clip, the reporter and the dog reunited for yet another supremely adorable moment that has taken over social media as most people's best moment on the internet. Adorable Dog Goes Viral For Balancing Objects on His Head! See Pictures of Harlso Perfectly Holding Everything From Roses to Doughnuts!

In the first video, the pet dog snatched away a reporter's mic during a live broadcast in Russia and it wasn't just that the four-legged intruder had also stolen so many people's hearts at the same time for being so adorable. Journalist Nadezhda Serezhkina of Mir TV was preparing to update viewers about the weather for the coming days and soon a golden retriever stole all the spotlight after entering the frame to grab the popsicle looking mic from her. He ran away leaving the news anchor stunned while she chased him.

Adorable Dog Who Ran Away with Mic During Live Weather Broadcast:

A dog in Russia grabbed the reporter's microphone and ran away during a live broadcast pic.twitter.com/R1T8VZ5Kpt

The cameraperson, who kept filming, caught how Serezhkina tried to chase the pooch to get her mic back. The broadcast was not interrupted despite the hilarious incident, and viewers could see everything that happened from beginning to end. However, video went viral on Twitter after reporter Ali Özkök posted it. Soon, the journalist caught up with the dog and retrieved her microphone after a while. The reporter updated viewers that the dog did take a bite or two of the microphone, but the pooch was "uninjured". Watch video:

This is the part! pic.twitter.com/2P46nr1AYH

Social media has been flooding with reactions. Check:

This is good television. https://t.co/bPQomi3Xom

Please let this happen to me at some point in my career 😂 https://t.co/7RPse3cVGA

Apart from that people on social media loved the “pawsome interruption” and said it brightened their day. “Mic looks like a popsicle, who can blame the adorable dog?” commented one user. “Obviously microphones in Russia are made out of bacon,” another remarked.

(The above story first appeared on LatestLY on Apr 03, 2021 03:20 PM IST. For more news and updates on politics, world, sports, entertainment and lifestyle, log on to our website latestly.com).