Dr Kumar Patil, a native of Tanuku town in West Godavari district of Andhra Pradesh, prefers to live on in a bunker of his house in Donbas, 850 km from the Ukraine capital of Kyiv, as he does not want to leave behind his two pet big cats - a leopard and a black panther. 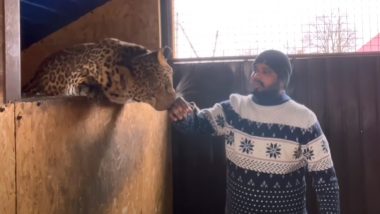 Vijaywada, March 6: Several stories of Indian students bringing back Huskies and cats to India after being evacuated from war-torn Ukraine has been making rounds on social media. But Dr Kumar Patil, a native of Tanuku town in West Godavari district of Andhra Pradesh, prefers to live on in a bunker of his house in Donbas, 850 km from the Ukraine capital of Kyiv, as he does not want to leave behind his two pet big cats - a leopard and a black panther.

According to a report in Times of India, Dr Kumar Patil is a native of Tanuku town in West Godavari district of Andha Pradesh. He lives in Donbas, a place around 850 km from the Ukrainian capital Kyiv, and has been helping scores of Telugu students and others to reach the nearest border safely for evacuation to India.

Since Russia’s attacks started, Kumar, also an Youtuber, has been uploading videos along with his big cats, and taking a stroll with them. “I do not want to leave Ukraine as my pet jaguars will have none to look after them," he said.  Indian Student Brings Friend’s Dog Along With Him, Says People Are Leaving Their Pets Behind in Ukraine

Kumar went to Ukraine 15 years ago to pursue his MBBS and settled there as a medical practitioner. He acted in four Telugu films, which however are not released. He also made a guest appearance in TV serials in Telugu, Tamil, and Malayalam. Dr Kumar acted in a couple of movies in Ukraine.  Indian Student Refuses to Fly Out of Ukraine Without His Pet Dog

Kumar, who has been a pet lover since his childhood, took big cats as pets after watching a Telugu movie, in which the protagonist had a cheetah as his pet. “Initially he planned to have a Bengal Tiger or an Asiatic Lion as his pet, however, the authorities denied permission citing his financial abilities to feed these big cats. They opted to have one of the rare breeds of big cats and also an endangered species, a jaguar. Also, he got the license of owning a jaguar from the authorities.

He claims that the jaguar species which he has is the rarest in the world and there are only 21 such types and one with Kumar. This species is known to be one of the dangerous breeds among big cats such as tigers and Lion. Kumar named his pet male jaguar as “Yagwar’.

He has been looking after this ‘Yagwar’, for the last 19 months, and with an intention to increase the number of these rare breeds, Kumar two months ago bought another Black Panther, for purpose of mating between these two Jaguars.

Kumar also mentioned in his vlogs that he has been helping Indian students to reach the borders and asked anyone who needs help to reach out to him. his brother Ram Bandi has arranged four buses for people who wish to reach Ukrainian borders. Kumar also recently interacted with the Andhra Pradesh state opposition leader Chandrababu Naidu over a zoom call.

(The above story first appeared on LatestLY on Mar 06, 2022 04:06 PM IST. For more news and updates on politics, world, sports, entertainment and lifestyle, log on to our website latestly.com).