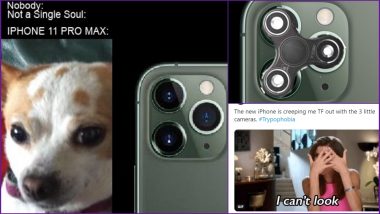 Tech giant Apple held the most coveted iPhone special event on September 10 at the Steve Jobs Theatre in California. The company launched three new iPhones under the iPhone 11 Series. Named as Apple iPhone 11, iPhone 11 Pro and iPhone 11 Pro Max, along with Apple Arcade, Apple TV+, Apple Watch Series 5, new iPad & iPadOS. And die-hard fans of Apple products were eagerly waiting for all of these announcements with a pinch of humour. As soon as the first images and announcements of the Apple Event were made, netizens reacted with some of the funniest memes in response. And now that all the products and their pricing have been announced, a sort of meme fest has begun online. Apple Event and iPhone 11 are among the top trends on Twitter but with hilarious memes being shared on them.

Unlike the previous iPhone series, the iPhone 11 seems to have failed to amaze the audiences. The triple rear camera is causing a trypophobia (an aversion to the sight of irregular patterns or clusters of small holes) to some. Meanwhile, the feature of Slofies or the Slo-Mo selfies hasn't impressed too. The new design, features and pricing have become the target of jokes more than the new phones on the rack. Check how some of the netizens reacted with funny memes on the new iPhone 11 series.

iPhone 11 comes with a built in shaver!! #AppleEvent #iPhone11 pic.twitter.com/SSsU2dSq5k

Or a Fidget Spinner?

#AppleEvent the iPhone 11 really looking like a fidget spinner pic.twitter.com/CiMR0E4AMa

Me trying to take a selfie with the #iPhone11 pic.twitter.com/wrfHqPTMke

My dog out here advertising for Iphone 11 Pro Max#trypophobia#iphone11#AppleEvent pic.twitter.com/hLWUim5e9c

A lot of people who have trypophobia have made their set of jokes for others to relate. Trypophobia essentially means an uneasiness on seeing a lot of holes that are at a close distance. So people with trypophobia cannot easily look at a beehive or objects with multiple bumps, it triggers their anxiety. The iPhone triple camera is also triggering the same feelings for some. Check some of those reactions too.

and the new iPhone designs is making me extra anxious pic.twitter.com/w1qUQyNhjN

So I googled #trypophobia cuz I seen it was trending in association with the new iPhone, long story short I think I got the shit and I hate Twitter for exposing me to it . pic.twitter.com/oAR0IWR9ny

New iPhone 11 giving me trypophobia feeling. Don’t be flexing that ugly ass phone around me if you buy it. 🤢🤮 pic.twitter.com/UGY3GZreiL

At this rate, Apple will introduce the #iPhone 20 like this#iPhone11 #trypophobia pic.twitter.com/4QyfF5w64c

So along with the humour, even the anxiety is kicking in for some users. There is no beating the creativity of the netizens who are using different aspects of the iPhone to make jokes on them. With such a varied response, it remains to be seen how many people do end up purchasing the new iPhone 11.

(The above story first appeared on LatestLY on Sep 11, 2019 12:21 PM IST. For more news and updates on politics, world, sports, entertainment and lifestyle, log on to our website latestly.com).