This year, following the second wave of Covid-19, Prasad had to again shut down his original eatery. Last year, Wasan had shared a video in which Kanta Prasad was seen shedding tears, while saying he has two sons and a daughter, but no one helps. 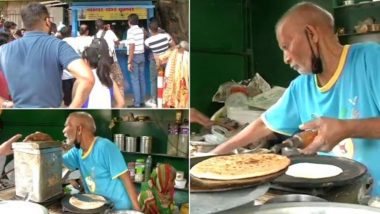 New Delhi, June 8: Kanta Prasad, who shot to overnight fame last year after a YouTuber had featured his struggles with a small-time eatery, is once again back to the same place where everything had dramatically changed. The new restaurant opened by Prasad could not pick any significant business following which it shut down around four months ago.

Reacting to this, YouTuber Gaurav Wasan, who played a key role in uplifting Prasad's standard of living and improving his economic status, only to get accused by the latter of misappropriating funds, said: "Nothing in this world is above Karma."

This year, following the second wave of Covid-19, Prasad had to again shut down his original eatery. Last year, Wasan had shared a video in which Kanta Prasad was seen shedding tears, while saying he has two sons and a daughter, but no one helps. Baba Ka Dhaba Donations Fraud Controversy: Blogger Gaurav Wasan Refutes Cheating Claims by YouTuber Lakshay Chaudhary and Elvish Yadav, Know What's The Entire Issue About 80-YO Couple's Food Stall in Delhi.

Prasad also said he and his wife cook and sell food at the dhaba throughout the day. The video became so viral on social media that Baba's (Prasad) fate changed overnight.

Soon, a large number of people had come forward to help him and long queues were witnessed outside the dhaba. People were seen eager to click photographs with him. Later, with the financial help Prasad received, he opened a new restaurant of his own, in which two chefs were also hired.

Talking to IANS, Azad, the 32-year-old son of Kanta Prasad, said: "About 4 months ago the restaurant was closed, as less number of people were turning up. Earning was very less in proportion to the expenses. Rent, salary of staff, electricity and water bills also had to be paid."

"More than Rs 1.5 lakh was spent to open the restaurant and after it was closed, all the goods were sold for around Rs 30-40,000. My father had never left the dhaba... a rumour was spread that Baba had left but he was, is and will be at the dhaba. Currently, only a few people are coming to the dhaba."

According to him, the monthly expenditure to run the restaurant was around Rs 2 lakh while earnings were only Rs 15,000. Is ‘Indu Ka Dhaba’ a New Social Media Eye Wash? Users Question Authenticity of the Post by Kanpur Makeup Artist.

Meanwhile, Wasan, reacting to all the developments, told IANS: "What should I say on this issue?.There is nothing in this world above Karma." Following a rift with Wasan, Baba later filed a case for fraud against him. In the complaint, Prasad alleged that Gaurav collected a huge amount of money from people in his name but he was given only a "portion" of it.

(The above story first appeared on LatestLY on Jun 08, 2021 09:29 PM IST. For more news and updates on politics, world, sports, entertainment and lifestyle, log on to our website latestly.com).