Baby Chimpanzee Hides Under Blanket After Seeing Her Mum Getting Killed by Poachers; Watch Heart-Breaking Video

An infant chimpanzee rescued in the Democratic Republic of the Congo was filmed looking hesitant to emerge from the safe cocoon of her blanket. 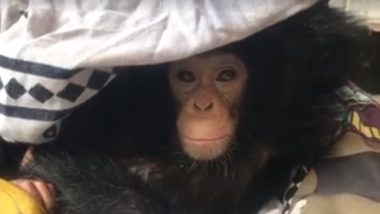 Chimpanzees are considered an endangered species, a sad scenario for which humans are largely responsible. Reasons that pose significant threats to this endangered species are massive destruction of their natural habitat, captured for the purpose of trading and hunting them down for the consumption of their meat. The traumatised baby becomes the victim of barbaric trade that sees poachers’ massacre. At recent, an infant chimpanzee rescued in the Democratic Republic of the Congo was filmed looking hesitant to emerge from the safe cocoon of her blanket. She is reportedly scared to come out after seeing her mother get killed by a group of poachers. The heart-breaking video is going viral raising concerns over cruel poaching that is destroying their home. 10,000 Stolen Endangered Tortoises Found in Madagascar House.

Lwiro Primates of South Kivu shared the video of the baby chimp on their Facebook page with a caption that explained her sad story. After killing her mother, the chimpanzee was kept tied up in a plastic bag in the bushes while the poachers attempted to sell her. “After witnessing the murder of her mum, this little girl was kept attached to a rope inside a plastic bag in the bushes waiting for a “buyer”. She is smart and independent (probably forced to be), but she keeps hiding herself under the blanket,” reads the post. Chimps Sleep on Cleaner Beds Than Humans.

The wildlife organisation further said that “it will take time to make her laugh again, to see her play and behave as a chimpanzee. The good news is that she is eating well.” Three other infants died in the same area before the rescuers were able to save them.

Chimpanzees are frequently caught illegally and sold as pets. Young chimps are often pursued due to their adorable appearance and the consequently high price enthusiastic wealthy owners are willing to pay for them. It is unethical, unsafe and often illegal to keep the chimpanzees incarcerated in our homes. Unlike domesticated animals like dogs or cats, they are wild animals, and they need to dwell in their natural environment. Conservationists have often reported that although protection for pet chimpanzees is much more efficient nowadays, only one in ten pet chimps is rescued.

(The above story first appeared on LatestLY on Mar 11, 2019 11:22 AM IST. For more news and updates on politics, world, sports, entertainment and lifestyle, log on to our website latestly.com).