Best Tweets of 2020 on Year 2020? Twitter Covers NYC Billboards in Viral Tweets About This Year and It's a Total Mood to Read! 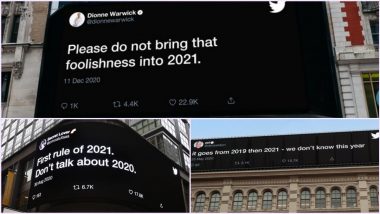 The year of 2020 has not been a great one for sure! Each one of us has had our low phases through the last 12 months, be it by staying at home, passing through bouts of illness or just gathering all that's happening around the world. And this year has been cursed all throughout by people everywhere, some of them have expressed better on Twitter. #2020WorstYear had been trending on Twitter with funniest memes as well. And now to just highlight them better, the billboards of New York City are covered in the tweets of the year 2020. As a part of Twitter's "out-of-home" campaign, some of the wittiest and funniest tweets of the year are now atop the billboard and murals here.

The official Twitter account has posted pictures of NYC billboards being covered in tweets related to 2020 and they are a total mood to read through. Other than New York, billboards and murals in Los Angeles, Philadelphia and San Francisco/Oakland are covered in tweets about this year. As per the microblogging platform, there were more than 6 million tweets about the year 2020 till date. Dionne Warwick, American singer's viral tweet was plastered on NYC billboard, among the famous personalities to make a mark. Earlier this month, Twitter itself asked users to describe 2020 in one word and we saw the hilarious entries to this question.

Yes We Need No Beer

It is no surprise, that tears of joy or the laughing-crying emoji became the most-tweeted emoji this year. We know you are chuckling through these tweets and well, they are too apt to sum up how this year has been. They clearly deserve to be highlighted.

(The above story first appeared on LatestLY on Dec 22, 2020 04:40 PM IST. For more news and updates on politics, world, sports, entertainment and lifestyle, log on to our website latestly.com).