Best Viral Memes of 2019: From Fiji Water Girl to Baby Yoda, Funny Jokes and Meme Trends That Made Everyone Laugh 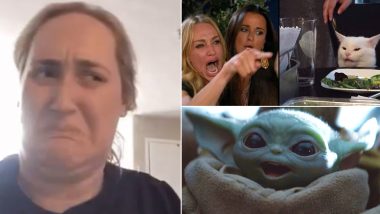 Another year has come to an end and are you ready to welcome the New Year 2020? If you are a die-hard meme lover then your motto for the New Year shouldn't be New Year, New Me, but New Year, New Meme! Geddit? Looking back at the year gone by, we saw some of the funniest meme trends going viral. Thus, we give you a recap of the best viral memes of 2019. For a generation that is hooked on to social media for memes more than interacting with each other, every new meme format is a delight. 'How Was Your 2019' Has Twitterati Sharing Funny Memes, Videos and Pictures to Describe Their Year.

Some of the popular memes of 2019 started with the Fiji Water Girl photobombing celebrities at the Golden Globe Awards. Then there was the first picture of the black hole, Kombucha review girl, a woman yelling at the cat, Area 51 raid among many others. And it is no surprise, that in the next year too, many such funny memes would continue. Given below is a recap of the best funny memes and tweets of 2019.

Everyone loved her look and confidence while she stared and smile in all the pictures at the Golden Globes 2019.

I am sure the spatial resolution of the #blackhole images will get better in future. pic.twitter.com/uN9lmN9fGe

While scientists made a breakthrough in April 2019, by releasing the first-ever image of the black hole, the centre of our Milky Way galaxy. But the picture was compared to everything from a donut to a Medu wada!

#AppleEvent the iPhone 11 really looking like a fidget spinner pic.twitter.com/CiMR0E4AMa

Apple's launch of iPhone 11 gave a new subject to make memes targeting all the features of the newest smartphone.

Woman Yelling at Smudge The Cat

This has to be one of the longest sustaining meme formats of this year, which is likely to continuing in 2020 as well. The savage responses of Smudge the cat with her angry face, won the internet this year.

The girl's change of expressions from tasting Kombucha for the first time was a total mood for many to express different situations.

What started as a fun event on Facebook became one of the most viral news of the year and inspired several funny memes and videos.

gonna tell my kids this is elon musk pic.twitter.com/iqPwzJBZV3

People on the internet got creative with redefining everything with sarcasm, about what they'd tell their kids.

This emerged as a 'savage' way of responding to anyone, especially the older generation, who usually criticise and insult the younger ones. So memes on "Ok boomer" also went crazy viral.

Baby Yoda, not just melted everyone's hearts with its cuteness but he inspired so many memes and jokes. In fact, there were different memes on each of his scenes.

These are some of the popular memes that went viral in 2019. Which of these was your favourite meme of this year? And brace yourselves for funnier memes and jokes that will come with the New year 2020.

(The above story first appeared on LatestLY on Dec 28, 2019 12:15 PM IST. For more news and updates on politics, world, sports, entertainment and lifestyle, log on to our website latestly.com).