Bhim Shila at Kedarnath Temple: Story About The God’s Rock That Saved Kedarnath in 2013 Uttarakhand Floods

One of the most significant calamities occurred at Kedarnath in 2013 when it was affected by flash floods, which was one of the worst disasters that occurred in 100 years of its existence. Bhim Shila stands for 'God's rock', which saved the holy temple of Kedarnath from being washed away by the turbulent flood water. 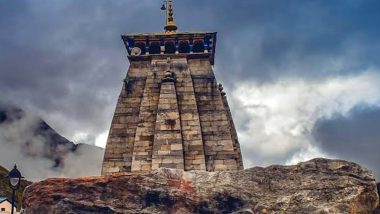 Kedarnath is one of the divine Hindu temples that is located in the Garhwal Himalayan range near the Mandakini river in the state of Uttarakhand. Dedicated to Lord Shiva, Kedarnath is believed to be the kindred form of Bholenath, the 'Lord of Kedarkhand'. Due to its uphill trek and unfavourable weather conditions, Kedarnath is often affected by heavy storms, landslides, incessant rain, etc. One of the most significant calamities occurred at Kedarnath in 2013 when it was affected by flash floods, which was one of the worst disasters that occurred in 100 years of its existence. The surrounding areas and the town suffered extensive damage. Still, the temple structure didn't suffer a drastic change as a large rock among the debris shielded the temple and acted as a barrier to protect the temple from the flood. The miracle rock or God's rock is called Bhim Shila. Below, get the complete details of the wondrous rock that protected Kedarnath from the catastrophic floods. Uttarakhand Tourism: Triyuginarayan Temple Situated 1,980m Above Sea Level Is a Hidden Treasure.

Everything to Know About Bhim Shila or God's Rock at Kedarnath

Bhim Shila stands for 'God's rock' that saved the holy temple of Kedarnath from being washed away by the turbulent flood water. On June 16, 2013, Kedarnath was hit by an unprecedented flood that caused heavy destruction of life and property, compelling people to take shelter inside the temple for several hours till the Indian Army airlifted the sufferers to a safer place. While the water started cascading at a breakneck speed from Chorabali Tal to Mandakini river, a vast rock stuck behind the temple and obstructed the debris that avoided its damage. Though it came along with the flood water, the boulder stood a few meters away from Baba Kedarnath Temple and diverted the water flow to the sides. Thus, the miraculous rock came to be known as the Bhim Shila or God's own armour that came in to protect the existence of the religious place.

Today, Bhim Shila has become a part of the Kedarnath temple sanctity as it is believed that the rock has magical powers that preserve the auspicious temple and maintain the sacredness of Kedarnath. Around 20 feet wide and 12 feet tall, Bhim Shila is known to have anchored at thirty feet away from the main Kedarnath. People worship Bhim Shila and pray to Lord Shiva for safeguarding his children during the most challenging times.

(The above story first appeared on LatestLY on Aug 12, 2022 04:27 PM IST. For more news and updates on politics, world, sports, entertainment and lifestyle, log on to our website latestly.com).