A cat has become 'Instagram famous' for her grumpy looks and smile. Barbara, earlier named Belle has earned more than 57,000 Instagram followers as people love her unique looks. 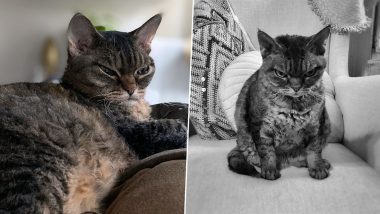 A cat has become 'Instagram famous' for her grumpy looks and smile. Barbara, earlier named Belle has earned more than 57,000 Instagram followers as people love her unique looks. She was adopted by an actress and animal rights activist Beth Stern's fosters before she was adopted by Sarah Borok who made her famous online. And her owner has rightly named her 'Grumpy Barbara' for her 'forever angry' look! Katryn, The Cat Who Adopted Four Puppies After Losing Her Kittens and Grieving for Days, Goes Viral For Nursing and Sleeping With Them (Watch Video)

Talking about her cat, Sarah told Bored Panda, "Barbara's character fluctuates between being profoundly disappointed in everything I do, to being an adoring ball of mush that I can manipulate into any position without resistance. She is up for affection and smothering any time of day. If anyone else enters the house though, she basically threatens to murder them." Cat Gets Prosthetic Limbs After After Car Ran Over Its Hind Legs; Becomes Popular on Social Media (See Pics & Videos)

I don’t understand whose idea this cat was but whoever that is, thank you.

This Cat Got No Chill!

Don't Talk to Me!

While Barbara looks ferocious, her owner says that she is quite affectionate. However, it took time for the cat to show her loving side to her human. Initially, she used to attack Sarah but she has now grown to love her and can't sleep without her. Sarah said Barabara sleeps in her arm every night. She says that even today at times she becomes moody at times; one Sarah shared pictures of her arm with scratches on social media.

The ASPCA says that the owners of aggressive cats should work with professionals to diagnose the problem and treat cats properly. Sarah keeps sharing pictures of her cat doing various activities, at times simply staring into the camera. At times cats lash out because of medical condition or complication

(The above story first appeared on LatestLY on Feb 26, 2020 02:16 PM IST. For more news and updates on politics, world, sports, entertainment and lifestyle, log on to our website latestly.com).