Katryn, The Cat Who Adopted Four Puppies After Losing Her Kittens and Grieving for Days, Goes Viral For Nursing and Sleeping With Them (Watch Video) 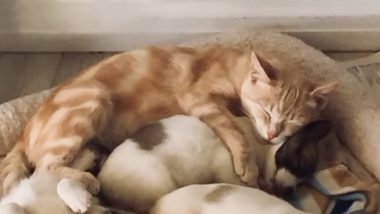 Mother's love knows no bounds when it comes to caring for babies, no matter whose they are. A mother never discriminates and we are also talking about animal mothers. Time and again cases have been seen when animals have befriended or even adopted babies from another animal species. The most recent example is a rescue cat, from the ginger tabby species who has become the mother figure to four tiny puppies. Before this, she was grieving after she lost her own kittens. Also known as, Katryn she was abandoned when she had just given birth to a litter. Husky Dog Saved Seven Kittens From Dying and Now Acts Like Their Mother.

Despite the kittens and their mother being taken to the Langebaan Animal Care, in Western Cape, South Africa, the kittens did not survive. It was reported that most of the time, the cat cried and mourned before she found four Border Collie cross puppies who arrived at the shelter. Katryn instantly fell in love with them. She licked them and treated them like her own She was still lactating so she also fed them. The three-week-old pups stayed around her. The cat slept next to the pups and also cleaned and protected them.

This is not the first time something like this has occurred. Last year Pusha, the cat went viral. She lived in a zoo on the southern Crimean Peninsula in Bakhchisaray, Russia and had adopted four orphaned baby squirrels along with her own kittens. She was raising them all as her own. Initially, Pusha wasn't fond of the squirrels and would often push them away, however, gradually she accepted them. Pusha even lets the squirrels drink her milk as if they were her own kittens.

(The above story first appeared on LatestLY on Jan 01, 2020 06:59 PM IST. For more news and updates on politics, world, sports, entertainment and lifestyle, log on to our website latestly.com).