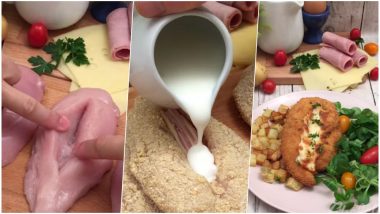 If you love eating chicken or meat then you'd know about the popular dish Chicken Cordon Bleu. Its a dish of meat made with meat or ham slices wrapped around cheese and then deep-fried to make it crispy on the outside. But if you are feeling hungry after reading the description, the latest recipe video for the said classic chicken dish might change that. A Chicken Cordon Blue recipe video shared by ChefClub on Facebook is going viral for all the wrong reason. Far away from being delicious, it is reminding people of watching an X-rated video on Pornhub. It has been called kinky and vile by some. Melty, Delicious Pizzas That Will Give You a Foodgasm Just By Looking.

The racy-looking video was shared by a food network called Chefclub on Facebook. Usually posting videos for different recipes, this one video has not just left people unimpressed but even offended some of the viewers. The splitting open of the ham to make the cheese filling is compared to a vagina. Many such striking resemblances were found by the viewers who have given negative reviews in the comments. Are You Instagramming Your Food Pics? Social Media May Be Promoting Unhealthy Eating Habits.

(The above story first appeared on LatestLY on Apr 01, 2019 04:36 PM IST. For more news and updates on politics, world, sports, entertainment and lifestyle, log on to our website latestly.com).