Clean Switzerland Roads During Floods True or Fake? Watch The Original Video From Boston, US

The video of roads turning rivers is originally from Boston and not Switzerland as claimed in the viral message. 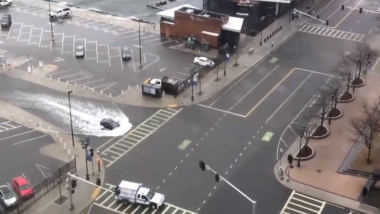 Video of streets flooding like rivers is not from Switzerland but Boston. (Photo credits: Video grab)

The messaging application WhatsApp and other forms of social media have taken over the conventional ways of sharing news and information. Thanks to the wide reach of social media, we get access to news, viral videos, messages just on our fingertips. WhatsApp has ensured that people can share videos, images, songs with all of their contacts. And a regular user of social media would be aware of getting many fake messages. A similar video message is being shared on social media which shows the cleanliness of roads in Switzerland. It shows that the roads have turned to rivers and one cannot even make out that the roads are covered in water, until cars pass by. The video may be impressive but misses an important element of the place. The video of roads turning rivers is originally from Boston in US and not Switzerland.

The message that has been forward on WhatsApp or shared on Twitter reads, "In Switzerland the streets are so clean that you can’t even see the rain water when it’s flooded." It is an aerial video of reputed news channel which shows the water flooding the roads, and cars making their way through the flood waters. But the real video is from US from the city of Boston taken in the month of March during the Nor'easter cyclone that caused flooding in major parts of Massachusetts’ coast. Fish Rain in Mumbai? Fake WhatsApp Video Going Viral on Social Media.

In Switzerland the streets are so clean that you can’t even see the rain water when it’s flooded. pic.twitter.com/mHHJ0KffRO

The real video is from Boston’s wharf areas in the month of March this year. The Nor'easter extratropical cyclone that took place here had paralyzed the cities for about two days. The storm was at its peak and the winds were strong causing all the roads to be flooded. Car drivers struggled to make their way through the river-like condition of the roads.

This is the real video from the tough situation that was faced in Boston, unlike what the viral message claiming it to be from Switzerland. Yes, the roads do look very clean making it difficult to differentiate the roads from water but it is also necessary to check the authenticity and story behind any viral message. If you have received the same video message, then don't forget to share the real story behind it with them.

(The above story first appeared on LatestLY on Nov 20, 2018 09:45 PM IST. For more news and updates on politics, world, sports, entertainment and lifestyle, log on to our website latestly.com).