Coronavirus spread its wings and the world came down to its knees. With over 169,605 total worldwide COVID-19 positive cases and a death toll of 6,518 as of March 16 morning, we hadn't seen anything like this in decades. The contagious infection has also lead to so many conspiracy theories about how it was predicted earlier. However, this one prediction that has taken over Twitter comes from a 40-year-old book. 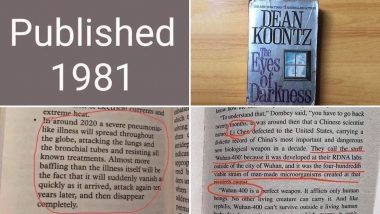 COVID-19, Coronavirus spread its wings and the world came down to its knees. With 198,426 coronavirus case and the death toll has reached 7,987 as of March 18, 2020, the coronavirus scare has brought out a paranoia amongst people. Since the coronavirus outbreak was one of the most unexpected things we saw coming at the start of 2020, the contagious infection has also lead to so many conspiracy theories about how it was predicted earlier. However, this one prediction that has taken over Twitter comes from a 40-year-old book. Conspiracy theorists believe that the author Dean Koontz predicted coronavirus pandemic, about Wuhan-400 in his bestselling novel The Eyes of Darkness. The book was published in the year 1981. Although there is a reference to a disease similar to coronavirus it is a mere reference and not a prediction of any sorts. Did Dean Koontz's 'The Eyes of Darkness' and Sylvia Browne's 'End of Days' Predict The COVID-19 Outbreak? What's The Truth About This Pandemic? Know All About Coronavirus Conspiracy Theories.

In the book, the deadly disease is named after the epicentre of coronavirus, Wuhan in China, but there isn't anything more to it than that one, shall we say, "coincidence". In The Eyes Of Darkness, Wuhan-400 is a bioweapon that kills everyone it comes into contact within the first 12 hours and not a disease. It is said that Wuhan-400 would "wipe out a city or a country without the need for expensive decontamination". The book reads: "Wuhan-400 is a perfect weapon. It afflicts only human beings. No other living creature can carry it. And like syphilis, Wuhan-400 can't survive outside a living human body for longer than a minute, which means it can't permanently contaminate objects or entire places the way anthrax and other virulent microorganisms can."

Check Some of The Tweets Online:

Author Dean Koontz predicted Coronavirus in his novel ‘The Eyes of Darkness’ published in 1981. pic.twitter.com/JRDlqKHC87

Here's What It Reads

#COVID2019 In 1981 Dean Koontz published his fiction book The eye of darkness and it talks about a virus created in Chinese military lab in Wuhan!

he named the virus Wuhan-400 which can be used as biological weapon and the virus will spread in 2020. Coincidence? Hmmm 🤔🤔

The Eyes of Darkness written by Dean Koontz was published on May 10, 1981. The author mentioned that around year 2020 a pneumonia-like illness would be developed at RDNA labs outside the city of Wuhan. Fast forward to present time. The entire world is fighting #COVID19. pic.twitter.com/6yWGpAK25x

“The eyes of darkness” released in 1981 by American Writer Dean Koontz #Covid_19 pic.twitter.com/qP5ZukFHR9

However, another piece from the late psychic Sylvia Browne's book End of Days is sending chills down the spine of believers. Kim Kardashian took to her Twitter page as well to share a screenshot that her sister, Kourtney sent it to the sisters’ group chat. Browne made a prediction way back in 2008 that describes conditions similar to what we are going through due to coronavirus. The prediction reads, "In around 2020 a severe pneumonia-like illness will spread throughout the globe, attacking the lungs and the bronchial tubes and resisting all known treatments. Almost more baffling than the illness itself will be the fact that it will suddenly vanish as quickly as it arrived, attack again ten years later, and then disappear completely." Kim Kardashian Tweets a Theory about a Pandemic that Psychic Sylvia Browne Predicted in 2008.

Are these predictions genuinely prophetic or are they just scarily accurate coincidences?

Author Koontz also writes in the book that Wuhan-400 kills people by attacking the brain. The book says, "The virus migrates to the brain stem, and there it begins secreting a toxin that literally eats away brain tissue like battery acid dissolving cheesecloth. It destroys the part of the brain that controls all of the body's automatic functions."

(The above story first appeared on LatestLY on Mar 18, 2020 10:43 AM IST. For more news and updates on politics, world, sports, entertainment and lifestyle, log on to our website latestly.com).