Did Rajinikanth Predict PM Narendra Modi’s Rs 20 Lakh Crore Relief Package Way Back in 2007? This Viral Clip From Sivaji Would Make You Believe So! (Watch Video)

Either Modiji is a huge fan of Rajinikanth and took inspiration from this scene to come out with this specific amount. Or Rajinikanth is truly a cinematic Nostradamus. 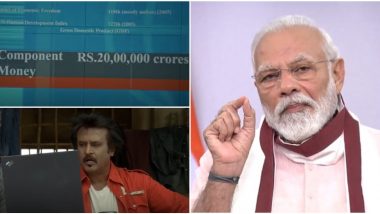 Is there anything Rajnikanth can't do? Like how the West try to use past episodes of The Simpsons to claim how they predicted present problems like COVID-19, in India, Thalaiva fans are looking into his filmography to see if they have predicted future scenarios that affect the country. And on occasions, they aren't disappointed! Like Thalaiva's filmy prediction of Prime Minister of India, Narendra Modi's recent speech on Lockdown management. India's Rs 20 Lakh Crore COVID-19 Relief Package, Announced by PM Narendra Modi, One Among Largest in the World.

PM Modi came on video earlier this week and promised an economic relief package of Rs 20 lakh crore to help the country cruise through the difficult period. Ever since the speech happened, the amount, Rs 20 lakh crore is going viral, with people either asking if the government can afford to lend out so much money, or making memes on it. Nirmala Sitharaman to Address Press Conference at 4 PM Today, More Details on Rs 20 Lakh Crore Economic Package to be Disclosed.

Now someone has dug out this scene from Rajinikanth's Sivaji: The Boss, that strangely mentions the same amount in a crucial scene, even though the film came out 13 years back. The scene has Rajinikanth's character hack into the databases to reveal that India has black money of Rs 20 lakh crore hidden in the coffers of rich people! What's more, if you see the video properly, it also mentions, Gross Domestic Product (GDP), which Modi had used in his speech mentioning how Rs 20 lakh crore is roughly 10% of India's GDP!

So either Modiji is a huge fan of Rajinikanth and took inspiration from this scene to come out with this specific amount. Or Rajinikanth is truly a cinematic Nostradamus.

Sivaji is a 2007 action entertainer, that was directed by Shankar and featured music by AR Rahman. Shriya Saran is the female lead. The movie was a huge hit in Tamil Nadu, and even its Hindu dubbed version was a success during its television run.

(The above story first appeared on LatestLY on May 15, 2020 11:02 PM IST. For more news and updates on politics, world, sports, entertainment and lifestyle, log on to our website latestly.com).