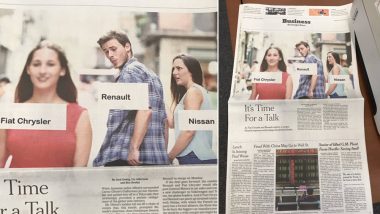 The distracted boyfriend meme has made it to the print edition of the New York Times' Business section! Yes, the NYT Business section used the popular funny meme on its front page suggesting a possible merger of Fiat Chrysler and French automaker Renault. The meme shows Renault as the distracted boyfriend, Nissan as the girlfriend who seems to be questioning Renault's action as it checks out Fiat Chrysler (the woman passing by). It seems that memes cannot be just confined to social media anymore.

According to the New York Times, if the merger is approved, Nissan which is currently an ally of Renault may soon become a rival due to its presence in the United States. In the country, Nissan is in competition with Chrysler. On Monday, Fiat Chrysler Automobiles presented a detailed plan to merge with Renault. They reportedly responded "with interest" to the plan.

As photos of the newspaper's front page went viral, social media users appeared glad that one of their favourite memes has made it to a national daily. While this could be the first time a newspaper published a half page meme, it also shows how the traditional medium has started including social media on the print edition. Meanwhile, investors responded positively to the deal and shares in both Fiat and Renault rose by 15 percent. Following the announcement on May 27, the companies now have a combined market cap of €34.24 billion.

(The above story first appeared on LatestLY on May 30, 2019 10:27 AM IST. For more news and updates on politics, world, sports, entertainment and lifestyle, log on to our website latestly.com).