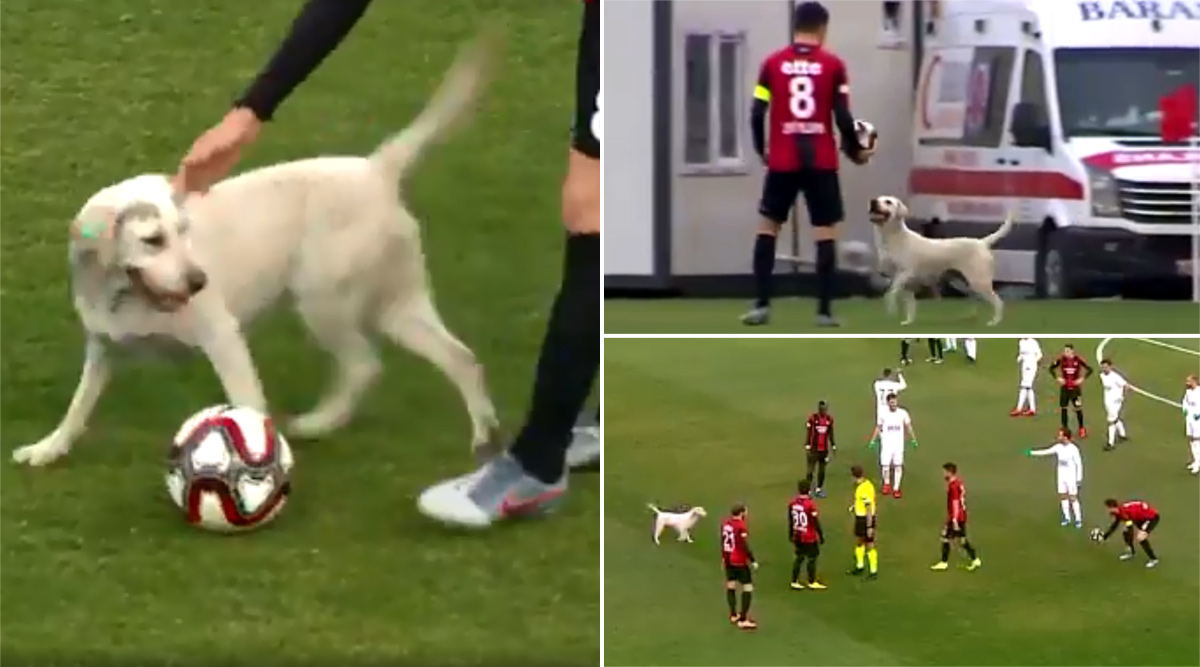 We have heard of humans invading game pitches and some even punished for disrupting the match. But recently in Turkish Premier League match between Fatih Karagümrük SK and Giresunspor, a stray dog disrupted the game to show off his skills. The stray dog invaded the pitch and caught the ball, not letting the players take it. When one of the players threw the ball off, the good doggo ran and got it back on the field. Finally, midfielder Zeki Yildirim of Fatih Karagümrük SK picked up him and carried away from the field so that their game could continue. The dog's skills with the ball were captured on camera and the video is now going viral on social media. The good boy has definitely earned praises for his skills and play with the ball. Viral Video: Dog Saves a Goal in a Football Match in Argentina, Gets Declared 'Best Goalkeeper' by Enthusiastic Netizens.

The incident took place during Sunday's game between Fatih Karagumruk Spor and Giresunspor in Istanbul, Turkey. Most dogs love playing fetch and ball seems to be their favourite. This stray too somehow managed to invade the pitch and catch hold of the ball. The players tried to take it from him but it wasn't willing to let go. So a player threw the ball to the sidelines in an effort to get the dog off the field, but that didn't really help, as the dog ran back to the field holding the ball in his mouth. Eventually, midfielder Yildirim picked up the pup and carried him away from the field.

A pitch-invading dog earned praise for its ball skills from a live TV commentator after it held up play in a professional Turkish soccer match https://t.co/V2KJ8Jwfor pic.twitter.com/4BneYQ10Kw

Here's a Video of Dog Getting the Ball Back to The Field:

The video is going viral with over 3 lakh views and everyone on the internet has declared him a "good boy." Fatih Karagümrük SK won the match with 2-1 but this doggo also proved to be a winner with his small appearance. It was an indeed an adorable sight in the game.