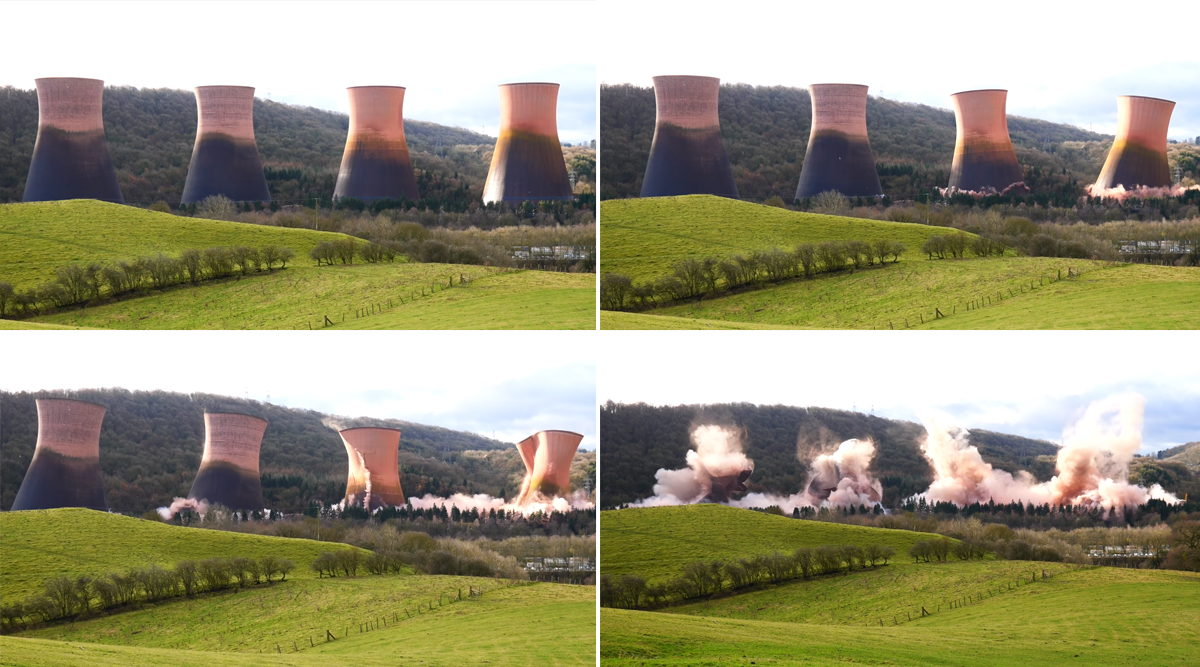 Dramatic footage of controlled demolition of colling towards in the United Kingdom has gone viral on social media platforms. Harworth Group plc, the owner of the former Ironbridge Power Station, successfully demolished its four cooling towers at 11 am on Friday, December 6, 2019. The clip shows the gigantic Ironbridge Power Station being brought down in just four seconds. The towers were broken for constructions of new houses, school, shops and infrastructure. Hundreds of people visited the birthplace of the Industrial Revolution at Buildwas in Shropshire, England to see the concrete towers being blown up at 11:00 GMT. Miraculous Video: Three-Year-Old Survives Fall From Six-Storey Building Balcony in China.

The power stations were opened in 1969 which is one of the largest of its kind in the United Kingdom. It towers used to produce enough electricity required for 75,000 homes. The towers stopped producing in 2015. Metro quoted former Ironbridge Power Station worker Andy Holden, from Shrewbury, as saying, "I spent nearly 40 years maintaining the place, running the place, looking after it, doing my job as best that I could. I don’t want to be part of the demolition. The power station has been part of my life, it was nearly 40 years. It's helped me raise my children, it's helped me pay off my mortgage and it's gone now and I do miss the place, I miss the camaraderie and the work."

His former colleague Trevor Childs, from nearby Much Wenlock, added, "They looked nice, they blended in, but they were part of a power station, the cooling towers. The problem is, to keep them would have cost an absolute fortune." Ironbridge burnt coal for most of its life following which it was converted to run on biomass in 2012. After three years in 2015 under the EU Large Combustion Plant Directive that required polluting plants to install emissions abatement equipment to tackle acid rain. Harworth Group plc. who bought the 350-acre site said that the project would take 12 years to finish.