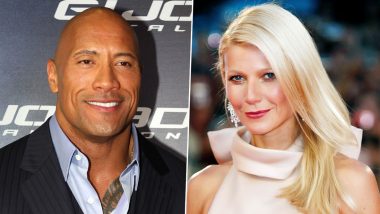 Just recently, Goop founder Gwyneth Paltrow launched the brand new This Smells Like My Vagina candle for $75 (£57) each and boy, it rocked social media hard. While her vagina smelling candles are all sold out,  Dwayne Johnson snooped into the Vagina Candle conversation started by comedian Adam Ray and had the best response to the beauty selling off candles that smell like her vagina. Dwayne 'The Rock' Johnson now wants sell candles made of the scent of his testicles! And we really cannot stop laughing. Dwayne, aka The Rock, has been challenged to create a scent that smells of his testicles and the hunk replied to it in the most hilarious way Gwyneth Paltrow Standing Inside a Vagina? Poster of Her New Netflix Show 'Goop Lab' Has the Funniest Twitter Reactions.

So it all began on Saturday when comedian Adam Ray posted a reaction on Instagram about Gwyneth Paltrow's brand new This Smells Like My Vagina candle. He said in one of his posts that had the screengrab of the news with: "It was only a matter of time until normal scented candles would be out of style. Your move Yankee Candle Co. Time to get @therock to sell candles that smell like his balls. "Price is Right ONE DOLLAR her, and sell them for $74 #vaginacandles #balls [sic]."

Now, Dwayne, didn't let this pass and was all sport about it. He said: "Brother I tried to make those candles but I kept burning my balls. So I moved on to shampoo #scentofsac." The funny conversation left Paltrow in splits. She said she was "deceased" by their joke business venture, saying it was "f*****g priceless".

Later, Adam Ray updated how, A simple Saturday joke has led to an internet friendship & a potential new line of male-only candles🤘Me & @therock are now taking scent suggestions for this early stocking stuffer". Really we cannot help but sit at our desk rn, but what if we really had testicles smelling candles?

(The above story first appeared on LatestLY on Jan 13, 2020 07:40 PM IST. For more news and updates on politics, world, sports, entertainment and lifestyle, log on to our website latestly.com).