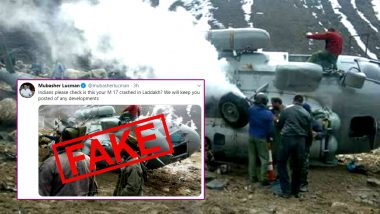 New Delhi, September 13: A journalist from Pakistan on Sunday sought to know whether Mi-17 chopper of the Indian Air Force crashed in Ladakh sharing a picture of a crashed aircraft. Mubasher Lucman, who claims to be the top anchor in Pakistan, tweeted about the purported crash of IAF's Mi-17 chopper in Ladakh amid tension between India and China along the Line of Actual Control (LAC). Indian Army, China's PLA Engaged in Fresh Clash at Pangong Tso Near LAC? PIB Fact Check Terms Reports Fake News.

"Indians please check is this your M 17 crashed in Laddakh? We will keep you posted of any developments," Mubasher Lucman tweeted. The fact remains Mubasher Lucman attempted to spread fake news as the picture that he shared is of Mi-17 V-5 helicopter that had crashed in Uttarakhand 2018. On April 3 in 2018, IAF's Mi-17 V-5 chopper crashed near the Kedarnath temple. The accident occurred after the helicopter collided with an iron girder near the helipad.

Indians please check is this your M 17 crashed in Laddakh? We will keep you posted of any developments pic.twitter.com/Oc8LJVlGYp

The helicopter was carrying some stuff for the Indian Army when the accident took place. It was not involved in any aerial dogfight. However, Mubasher Lucman did not check facts and tweeted a picture of 2018 Mi-17 chopper crash to imply that IAF's aircraft crashed in Ladakh. Twitter users from India called out Lucman for spreading fake news and highlighted his blunder.

No. The picture is old. No Mi-17 chopper has crashed in Ladakh recently.

(The above story first appeared on LatestLY on Sep 13, 2020 11:02 PM IST. For more news and updates on politics, world, sports, entertainment and lifestyle, log on to our website latestly.com).