People are receiving text messages claiming that their MSME business loan has been sanctioned under the Mudra Yojana and directing them to click on a link to verify details.Debunking the false information, a fact check by the Press Information Bureau (PIB) has found out that such messages are fake. 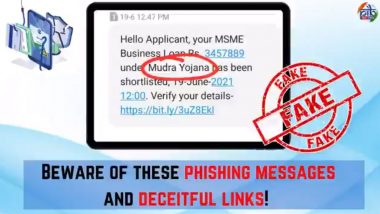 New Delhi, June 25: A text message claiming that an MSME business loan has been sanctioned to the receiver has been received by many people. The message further says that the loan has been shortlisted under the Mudra Yojana. It further directs the receiver to click on a unverified link for verification of their details. Many people have been receiving such text messages. Finance Ministry Granting Loan Under PM Mudra Yojna With a Legal Charge of Rs 2,150? PIB Fact Check Reveals Truth Behind Fake Approval Letter.

Debunking the false information, a fact check undertaken by the Press Information Bureau (PIB) has found out that the message is fake. Miscreatnts are sending the messges to dupe the general public. PIB further asks the people to not click on suspicious links and never disclose personal information or OTP on such platforms. Scam Alert! IOCL Giving Mobile Phones, TVs, Free Gifts as Part of Lucky Draw Offer on Its 40th Anniversary? PIB Fact Check Reveals Truth Behind Fake Message.

A text message sent by fraudsters claims that an MSME business loan has been sanctioned under Mudra Yojana.

This message is #FAKE! Do not click on suspicious links and never disclose personal information or OTP on such platforms.@minmsme @FinMinIndia #PIBFactCheck pic.twitter.com/FDYczCzgRU

Government and its various agencies have time and again cautioned the people against such fake messages. People are advised to rely on official government notifications and releases by the relevant authorities for any such information. They are also advised to verify and cross check any such claim to avoid falling for misleading or false information.

Message claims that recevier\'s MSME business loan has been sanctioned under the Mudra Yoajan.

The message is fake.

(The above story first appeared on LatestLY on Jun 25, 2021 11:03 AM IST. For more news and updates on politics, world, sports, entertainment and lifestyle, log on to our website latestly.com).